The tripling of consulting spending in the past 14 years has prompted criticism, amid concerns that the funding could be better allocated elsewhere. However, the Department for Education has seemingly doubled down on its efforts, earmarking a further £2.3 million for consultants to find areas to cut costs in within the education sector.

Education is one of the most important fronts on which the future of the UK can be prepared for. Immigration controls look set to stifle the flow of talent into the country post-Brexit, while large swathes of an ageing population approach retirement age, and swift technological change means that the remaining work-force must be equipped with the relevant skills if the UK is to avoid wasting their potential, amid a depleted talent pool.

As the education sector tries to position itself for these seismic shifts, the Department for Education (DfE) has revealed that it has tripled its consulting spend over the past 14 years. While it is common for consulting spending to soar in such circumstances, as entities of all shapes and sizes seek external expertise to help accommodate for change, however, the fact that the figures have come amid a lasting legacy of austerity in the state education sector has seen it marked out for heavy criticism. The NEU teaching union was particularly cutting with its stark warning regarding the statistic. 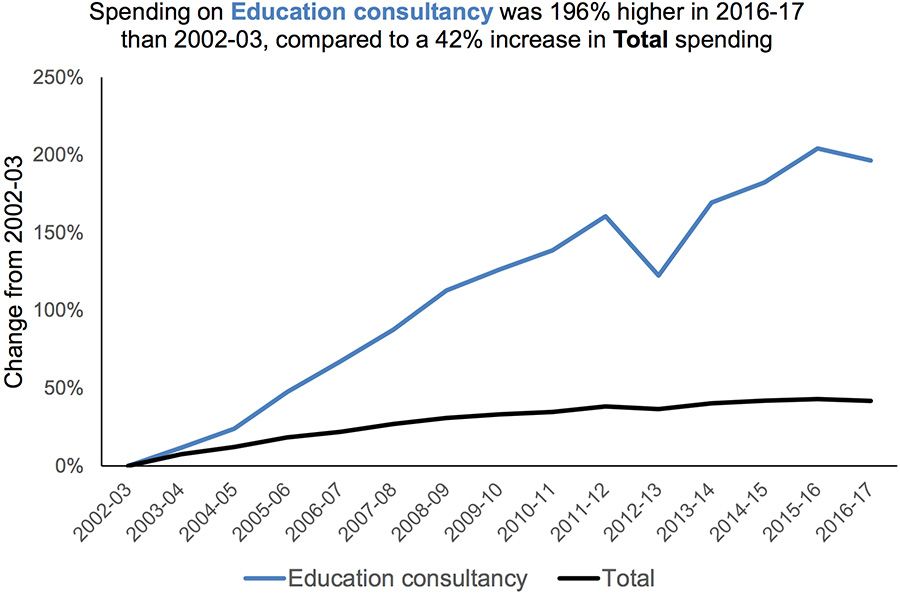 Speaking to the TES (formerly known as the Times Educational Supplement), Dr Mary Bousted, joint general secretary of the NEU, said, “Schools are paying inflated prices for support and advice which they used to get from their local authority. They have very complicated legal responsibilities around things like land, safeguarding, health and safety and employment contracts, and they turn to consultants because it’s all they’ve got. I would imagine that the standard of advice is highly variable, but how it is evaluated is anyone’s guess. Some consultancy will be value for money but a lot of it won’t be, and some schools will be falling prey to snake oil salesman.”

Bousted pulled no punches, but her remarks tap into an unsurprising sentiment shared across the UK education scene, considering that the increase on spending on consulting far surpasses much-needed spending on actual teachers. In 2016-17, spending on education consultancy was 196% higher in real terms than it was in 2002-03.

Campaigns by school leaders over budget cuts have dogged the government in recent months, and high-profile union activity targeting parents during the 2017 general election campaign on the matter is widely believed to have cost the Conservative party votes. Such is the extent of the criticism, that the DfE even issued surprisingly blunt departmental advice for school leaders, governing bodies and local authorities – that they should not express opinions for “party political purposes,” in what many see to be a bid to silence legitimate criticism.

While spending on education support staff rose by 138% over the same period, and spending on back office functions was 105%, spending on teachers rose by a mere 17% in real-terms. Overall school spending per pupil rose by 42% in real terms over the past 15 years, but following multiple real-terms falls in spending in the most recent of those years, this still pales in comparison to consulting spending, and the string of figures has raised further ire from many public figures as a result. 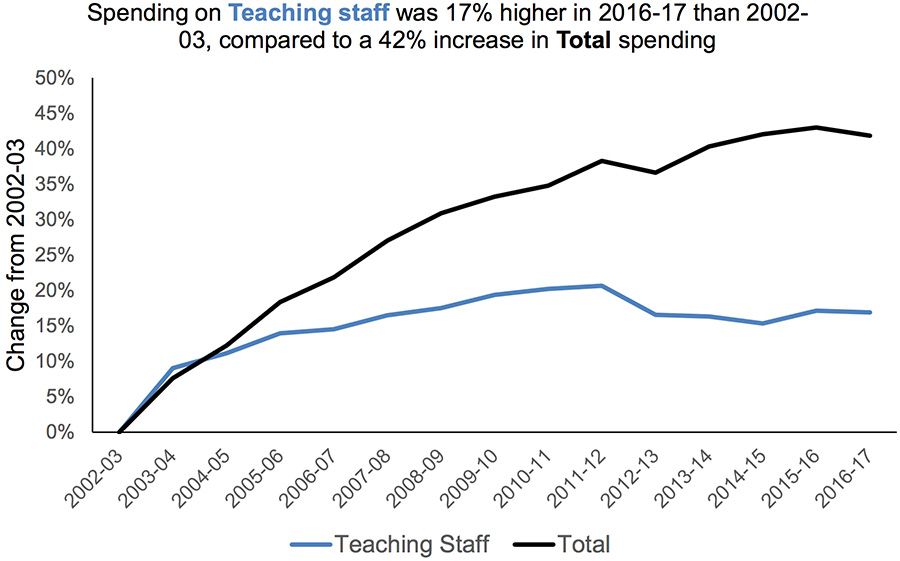 As a result, the lion’s share of spending in the state’s education sector went to non-staff, boding the question of just how much of this expenditure will directly benefit students in the short or long-term. Spending on non-staff, such as consultants, was 68% higher in 2016-17 than 2002-03, while staff spending was just 33% higher.

The release of the figures, which were reportedly part of a drive to cut costs at schools by the Department for Education came as the same institution launched plans to spend a further £2.3 million on at least 160 “money-saving advisers”, who will be parachuted into schools struggling to afford providing their important public service. The new consultants will apparently inform schools on how to best cut costs.

A team of the so-called school resource management advisers has been working with a small number of schools since January 2018, providing “impartial, expert business advice” on how to make best use of revenue and capital resources. The DfE claimed that the trial, which also had involvement from the Institute of School Business Leadership, won positive feedback from the sector. It is now planning to significantly ramp up the scheme. 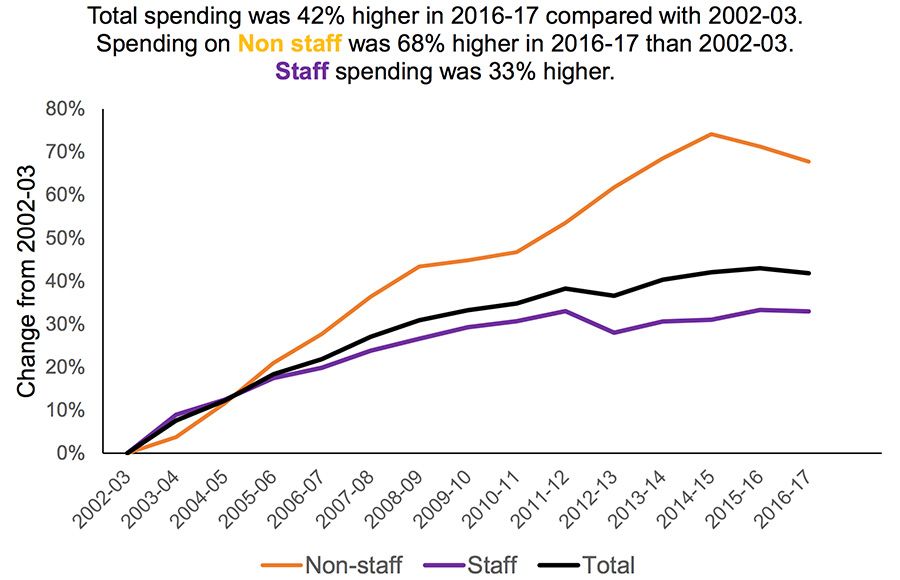 An initial expansion of the advisers network was announced by Lord Agnew, the academies minister, in May 2018. Speaking to school business leaders, Agnew said the advisers will look to maximise resources and free up more time for teachers. At the time, ministers had said they wanted to reach around 60 schools by the end of this month ahead of a national expansion in September.

Official documents have since shown the DfE aims to recruit at least 160 advisers over the course of between two and three years. This is on the low-end of the spectrum, however, and as many as 250 advisers could be recruited, and will likely be paid £400 a day, in line with the rates of the pilot.

A recent survey among buyers of consultancy services identified the top management consulting and M&A advisory firms operating in the education sector. The subsequent list recognises large consultancies such as EY-Parthenon (the strategy consulting subsidiary of EY) KPMG, PwC and boutiques with a focus on the education sector, including Cairneagle Associates and William Clarence Education.