The last 12 months saw the UK’s consulting industry to sustained disruption – with mounting public scrutiny, digitalisation and Brexit pressures exacerbated by a global pandemic. As a result, Consultancy.uk’s most popular articles published in 2020 were dominated by the challenges and opportunities presented by Covid-19 to the British advisory market.

By the reckoning of Source Global Research earlier in the year, the planet’s consulting scene was worth a combined $160 billion, but with the coronavirus having pushed many sluggish economies into the deepest recession since the Second World War, clients delayed projects, decreasing their scope or cancelling them all together. The researchers went on to predict that by the close of play in 2020, the consulting industry would subsequently be 18% smaller than at the start of the year.

As a result of its impact – both directly on the health and welfare of consultants, and indirectly by the toll it took on clients – it is not a surprise that the biggest consulting news stories in 2020 have been dominated by Covid-19 then. Even among the top table of British consulting, firms have struggled to adapt. Illustrating the panic that the pandemic initially sparked in the industry, Big Four giant Deloitte’s measure to place all its Australian staff on leave for one week at the start of the outbreak was the second most popular article on Consultancy.uk this year. 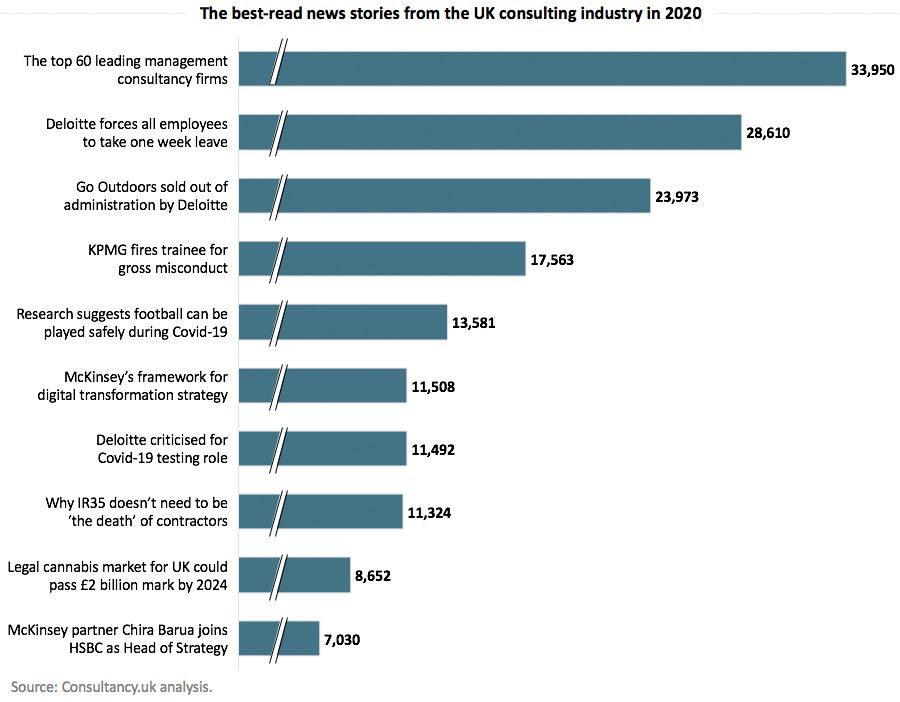 At the same time, while the coronavirus crisis saw some projects put on the backburner – including adapting to of new IR35 rules, which were a leading news story early in the year, before being suspended due to the pandemic – the situation also provided some consultants with new opportunities. With many companies pushed into financial distress by the economic turbulence of 2020, the restructuring wings of many consulting firms have seen huge spikes in demand, as reflected by retailer Go Outdoors’ administration being one of the leading consulting news items of the year.

On top of this, the UK consulting sector saw keen demand from the public sector for help responding to the crisis. With a decade of austerity having depleted the resources and personnel of Britain’s NHS and Civil Service, professional services firms were often drafted in at short notice to help the Government paper over the cracks; working on everything from Covid-19 testing regimes, to the production of hospital ventilators, to the development and implementation of the UK’s test and trace service.

With many clients now working from home, many firms were meanwhile forced to accelerate digitalisation plans. There was subsequently a massive increase in demand for consultants to help oversee digital transformation projects at short notice, as reflected by the popularity of an article outlining McKinsey & Company’s digital transformation strategy.

Elsewhere, as forms of work which could not be digitalised sought for routes to return to ‘normal’, many consultants were also contracted to help devise ways for a safe return to work. Most notably perhaps, consultants played a key role in helping research and strategise for the return of professional footballers to pitches across the UK, following the suspension of their season in early spring.

There was also an increasing demand for former consultants to bring their skills to in-house functions at a plethora of big-hitting clients. To this end, in recent months, a spate of former Partners from top strategy consultancies have taken top jobs in the financial sector, as it attempts to navigate a number of complex challenges.

While these new lines of demand will almost certainly continue into 2021, a great deal of uncertainty surrounds the future of the consulting industry, and the broader UK economy in the coming year. With Brexit set to finally conclude at the turn of 2021, and British companies still battling to overcome a productivity crisis, the slow roll out of a vaccine and potentially dangerous new variants of the virus could create a perfect storm for the country’s beleaguered economy. As a new year of economic and geo-political uncertainty dawns, consultants must once again keep a weather eye trained sharply on the news, if they are to continue to thrive in such a potentially turbulent environment.