The Consultancy.org group has enjoyed another year of exciting growth in terms of both readership and reach, with coverage now spanning every continent. In Britain, this has seen continuous expansion in terms of site hits, a rapid increase in leading industry interviews, and even recognition that Consultancy.uk is now one of the top 100 leading publications for digital transformation trends.

This has been reflected by a number of the platform’s most read articles featuring digital transformation as a theme. In the top ten best viewed stories of the year, four articles involved digital transformation in some capacity. A report by Protiviti exploring how data analytics could become a game changer for internal audit followed a story on how Accenture, Deloitte and McKinsey & Company had splurged some $1.2 billion in 2017 on purchasing a glut of digital design agencies, as well as an article listing the 10 best consulting firms for IT strategy and digital transformation. 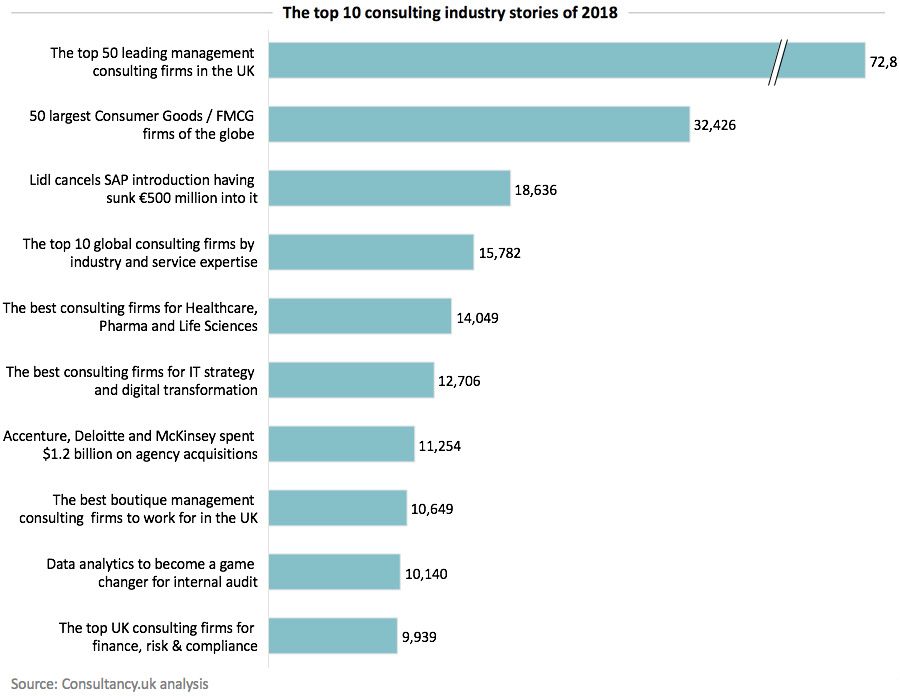 Each of those articles was viewed more than 10,000 times before the turn of the year, as was one more, which combined another leading trend: the British retail scene. A piece on Lidl’s cancellation of a €500 million SAP roll-out was read over 18,000 times, making it the third biggest story of 2018. It followed another retail-related article, which outlined the 50 largest consumer goods firms on earth.

Unsurprisingly for a platform focused on the consulting industry, firm rankings were the biggest draw for visitors. Including the previously mentioned piece on top firms for IT strategy, five of the most popular articles ran with this theme. The smallest of these was a piece examining the top firms for finance, risk and compliance, which was the only top 10 article to narrowly miss out on 10,000 hits. Similar rankings on the best boutique management consulting firms to work for and on the top firms for healthcare, pharma and life sciences brought in a combined 24,000 views.

While specialist consulting articles did well, however, it was the generalist rankings which brought in the largest numbers. An article on the 10 best global consulting firms according to industry and service expertise was read more than 15,000 times, but even that was dwarfed by the most viewed article of 2018. With more than 72,000 hits, a ranking of the top 50 leading management consulting firms in the UK was the run-away leader of the year.

Come the end of 2019, the trends which dominate consulting industry news are likely to have shifted. A great deal of uncertainty surrounds the future of the consulting industry, and the broader UK economy in 2019. With Brexit set to finally come to fruition, and British companies still battling to overcome a productivity crisis, a talent shortage resulting from an ageing population, high employment and a slowing of migration could further lend to a troubled year. Perhaps more than any year since the financial crisis, then, consultants must keep a weather eye trained on the news if they are to continue to thrive in such a turbulent environment.