According to some experts in the field of management 40% to 50% of business transformations fail, while some suggest this could see companies pouring millions down the drain. For those keen to defy the nay-sayers, though, a new report from Proudfoot provides three takeaways for exectuives and managers seeking to ramp up their execution success.

1. A clear vision, and one that is fluid

According to the study, one of the key caused of failure in a change is the pursuit of the wrong change upfront or shifting the end goal over the course of the project. Before companies pursue change, it is evident organisations need to spend a period validating their thinking around the ‘what’ needs to change and not only around the ‘how’ they intend to make the change. It can be tempting to innovate for the sake of innovating, as new technological advances are leveraged by businesses on a daily basis. However, it is important to pursue value, which ultimately must be aligned with the overarching priorities of the businesses.

A major hurdle many firms face in this respect is that their objectives for a transformation program can shift over time. Illustrating this point, only 7% of organisations start out with the aim of cutting headcount, but 19% are trying to do this by the time they reach the stage of roll-out or implementing change. 27% of organisations in their planning stage also say that improving customer service is a priority, however by the roll-out, this has shrunk to 7%, while a third of organisations begin with the intention of modernising their technology, and this figure similarly falls by two thirds by the end of a project.

In order to make the most of potential changes, and avoid an awkward period of transition which could be detrimental to a business’ performance, speed is key. The longer a transformation programme lasts the more negative people’s views often become when regarding the changes in question. In order to facilitate this, usually companies cut down on briefing time, with proportion of people who’ve been briefed as a project continues shrinking. 60% of people in organisations where the change initiative started in the last year told researchers that they had been told about it, twice the number briefed in a change programme which has been running two years or more – however this can be a risk as it may impair the project through poor communication.

Understanding of the potential impact of the programme is exceedingly important for a successful transformation, however it plummets from 76% among those just starting out on the process, to 56% of people where the programme has lasted more than two years. Most often understanding drops most severely beyond the two-year mark, with projects of this duration needing to be time boxed, dividing them down into phases that allow people to see movement rather than a long and winding road of never ending change. 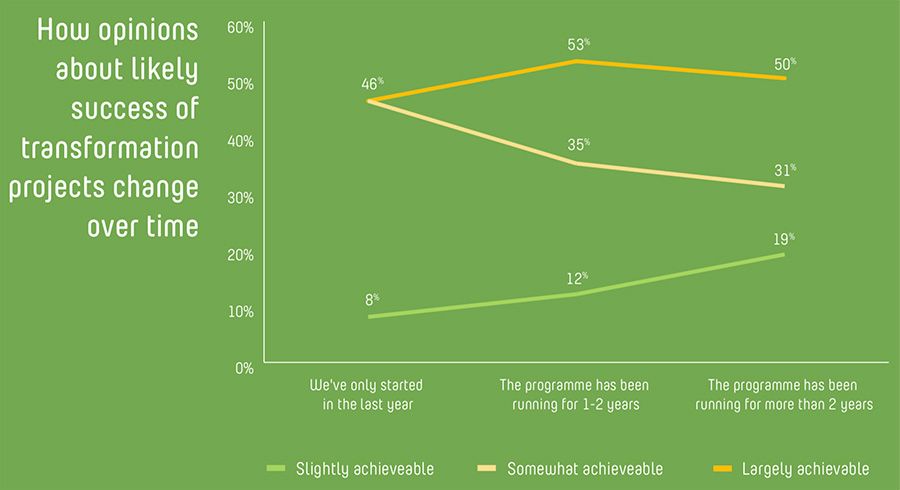 The question that firms are confronted with in this case is how to design programmes that don’t last that long for the same audience? The booming practice of agile working tends to be the key here, providing organisations with an approach to improve both efficiency and effectiveness, as well as employee satisfaction. Agile puts speed and autonomy at its core, advocating a process characterised by the division of tasks into short phases of work and frequent reassessment and adaptation of plans. According to Proudfoot, well-designed change programmes work rapidly through the organisation in waves (target populations) and sprints (target outcomes in time boxed schedules). This enables people to see rapid prototypes, results and outcomes; in other words a transformed business at their level.

3. It is all about people

Finally, businesses would do well to remember the centrality of human beings in their operations. Change may commence with strategies, processes and systems, but in the end, the study states, “it is all about people”. This is particularly pertinent as a piece of advice, as employee resistance can be one of the biggest killers of transformation success.

If companies cannot inspire end-to-end confidence, the potential for such resistance increases dramatically. Once again then, communication is key. A transparent line of communication with staff has the potential to keep employees invested in change, without fearing unexpected forks in the road, particularly relating to headcount reduction. The best communication agenda to this end involves regular steering committee meetings to remove barriers to implementation, regular team meetings to discuss progress, measuring and marketing results to ensure visibility of progress and rewarding people along the way rather than waiting for when they cross the finish line.

Backing change up with tangible benefits as well, things that people can point to as a reward for participating helps to create an environment which will encourage staff to change by choice, by making it plain how they stand to benefit from a transformation. It is also important to bear in mind that what motivates individual employees can vary, so top performers calibrate rewards as closely to the individual worker as possible.

Remarking on the advice, Pamela Hackett, Proudfoot’s CEO and author of the study, said, “What if you could engage the enthusiasm to make change happen and harness it to actually create the rapid, sustainable change you need? You can, and it’s the role of leadership to do it.

“Today’s transformation programmes are unprecedented in their scope and scale: most organisations have no comparable experience to draw on. They have yet to do transformation successfully and repeatedly, so it comes as no surprise when they fail. After all, most people have not lived through major transformations from end-to- end either, let alone led them repeatedly to know the pitfalls, and the processes that work. And yet, the need for successful, transformative change is paramount.”