According to a Financial Times article in the “noughties”, strategy consulting was an endangered species declining rapidly in the face of internal strategy units. Since then, however, the three major US-headquartered strategy firms – McKinsey & Company, Boston Consulting Group and Bain & Company – have thrived.

The old definition of strategy endures, namely “major decisions which will alter the direction of a company/business by influencing the way it deploys resources, human and financial, thereby creating and enhancing its competitive advantage versus the other players domestically or internationally”.

Lower delivered cost and high relative (to competitors) market share remain the holy grails in strategic “fights to the death” – think Google versus all other search engines that have been trampled underfoot in the last 15 years. Strategy is therefore the domain of the Board, CEO and his senior lieutenants. But why would such experienced and powerful executives seek to invite strategic advice from outside? After all, they went to the same business schools and have much more hands-on experience than any consultant. 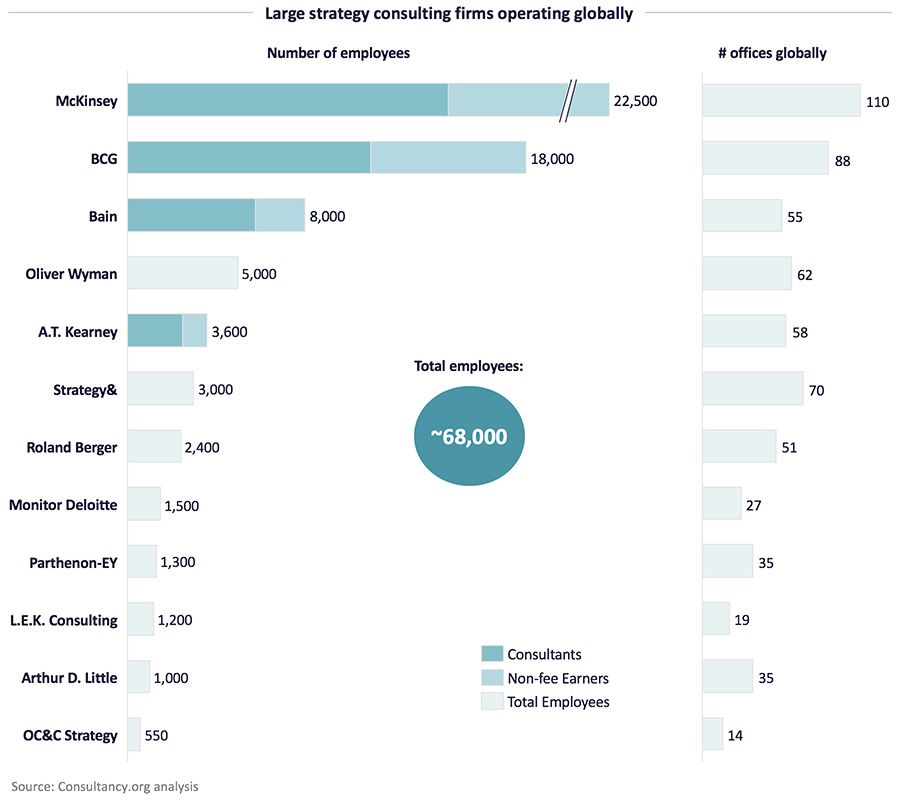 Well, yes and no. Strategy decisions are essentially existential. Get them wrong and the company goes downhill and the CEO’s tenure is very short lived. But surely – I hear you cry – the company can assemble its best talent internally to advise the Board? Yes it can, but will the assembled team be sufficiently objective, analytical, experienced, dedicated, independent and, not unimportantly, willing to tell hard, politically inconvenient truths to the CEO if that is what is necessary… Or are they even available at the right time?

In practice, the Board does not have the time to find out and failure is not an option. Even though it is expensive, it is much more sensible to reach out for professionals who are experienced in running such processes against relatively tight deadlines and who have the reputation of delivering.

Strategy consulting is unlikely to disappear any time soon – but is it growing? Well, just look at the macroeconomic complexities that companies face day in and day out nowadays. Continuing globalisation, digital disruption, changing consumer behaviours (e.g. attitudes to ecology), capital availability, innovation rates, et cetera. Not to mention that the size of bets that companies now have to make to gain competitive advantage have increased enormously (e.g. investment in a new car plant, the cost of a new drug).

Market sizing models show that the strategy discipline and, in its slipstream, strategy consulting, are still growing. But strangely, the three major global players have historically grown faster than the strategy consulting market. Why? Because they are adding new services day in, day out in the chase for even more growth and higher profitability. Strategy as a proportion of their total sales has been declining. According to one industry analyst, only a small percentage of McKinsey’s turnover is now related to strategy while the number for BCG was closer to an even split.

The rest of their sales are related to big (strategically important – but not pure-play strategy) projects which, historically, were the domain of the consulting arms of the Big Four accounting firms. Projects like post-merger integration programs, transformation programs, organisation redesign, business process re-engineering, digital transformation, et cetera.

What do these programs all have in common? They are big (requiring many consultants), long (12 months or more), lucrative (strategy consultants billed out at higher rates than consultants of the Big Four). These unbelievably profitable upsides dwarf, in the eyes of the leadership at the ‘MBB”, three important negatives.

Increasingly, strategy consulting is less than half of what these major suppliers do nowadays. So is strategy consulting going to become an endangered species in the future as the strategy “Goliaths” abandon it in favour of bigger, longer and often more lucrative work? Luckily, nature abhors a vacuum.

“Strategy consulting is not dead! The old competitors are branching out, while there are specialists emerging who will and are giving them a run for their money.”

In view of this, a few ambitious “Davids” have stepped into the breach. These strategy specialists scour at the best business schools and colleges for the best talent. By specialising sector by sector on the most complex business problems, they initially focus on small local clients, upgrading progressively to national champions and then finally become credible with global players within their sectors.

What is the promise of these specialists to their recruits? “Join us and become a world-class, C-Suite problem solver and only work on the most difficult, challenging and high-value problems that successful and talented CEOs can throw at us. And, by the way, when you have finished that problem, there will be another one thrown into your lap to keep you challenged!” Boredom is not an option.

So, no, strategy consulting is not dead! The old competitors are progressively abandoning it for “grass” that may (or may not) be greener elsewhere, but there are specialists emerging who will and are giving them a run for their money. And I should know: I founded one of these – OC&C Strategy Consultants. And what do we do? The clue is in the name. And that is all we do.