Combined, the globe’s top ten strategy consulting firms hold an estimated 20% to 25% share of the globe’s $110+ billion strategy & operations consulting market, but with digital disruption at play, they are having to quickly adapt to a new marketing environment to maintain usual rates of business. In today’s digital and mobile world, social media is a key channel for sharing updates, achievement and recruitment needs – and as a result, combined, the elite group of strategy consultancy firms have more than 6 million followers.

Last month BCG celebrated a milestone that not so long ago was thought of as meaningless. The MBB strategy giant surpassed the 1 million followers mark on LinkedIn. Founded on December 28, 2002, and launched on May 5, 2003, both recruiters and employers around the world now use LinkedIn to source candidates for jobs, and it can be a helpful tool for job hunting, career networking, and professional development.

As a result, the top ten strategy consultancies have a collective pool of followers of 6.2 million on their respective company LinkedIn profiles alone. With this one illustration in mind, while Twitter, Facebook and a host of other platforms also begin to hold a massive importance for consulting firms looking to adapt to a more vibrant and dynamic marketing scene, Consultancy.uk has analysed how BCG and its nine main rivals wield their global social media presence.

While BCG may have been celebrating the firm’s LinkedIn haul, by far the largest on the strategy consulting market is held by its competitor, McKinsey & Company. The firm’s presence is almost a third larger than BCG’s LinkedIn network, along with the largest strategy consulting presences on Facebook and Twitter. McKinsey’s social network subsequently stands at an impressive 4.5 million followers. 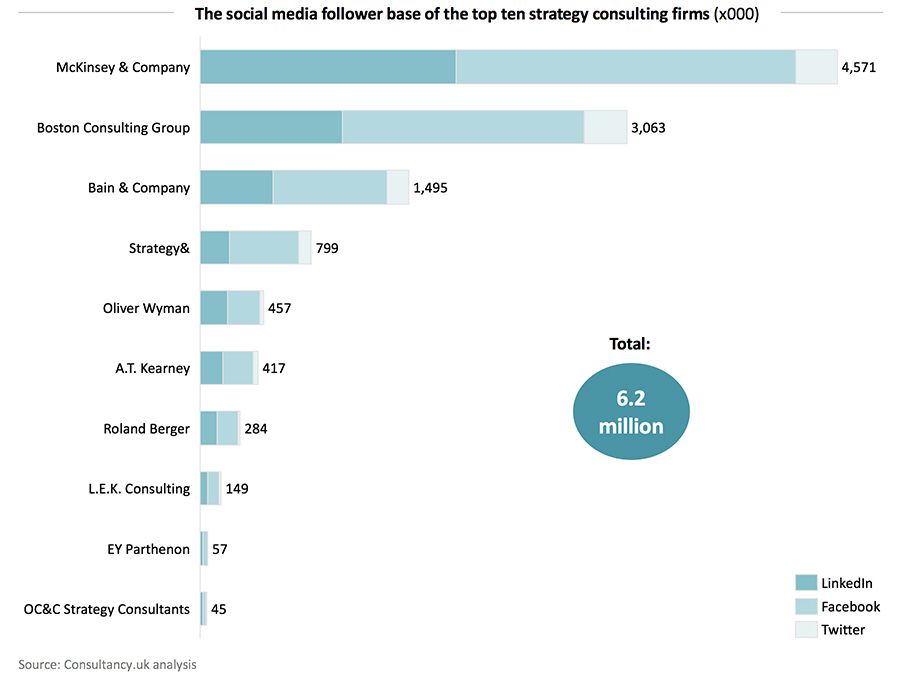 Interestingly, all the top 10 strategy firms have their largest presence away from the more business-oriented LinkedIn, however. While this is less distinguishable with the first two companies, the third MBB firm, Bain & Company, illustrates this more starkly, with 526,000+ people engaged with the firm’s network on LinkedIn, a further 811,000+ follow on Facebook. This is without taking into account the separate country pages for these consultancies, instead just looking at the unified page, meaning the engagement rate is actually even higher. This is most probably because of the less formal nature of Facebook, which millions of people are more active on more consistently, providing more opportunities for engagement than the careers oriented LinkedIn.

This is the case with the other top strategy industry players too. Strategy& has almost 300,000 more followers on Facebook than LinkedIn, while Oliver Wyman has a sizeable gap too. No company with more than 100,000 LinkedIn followers had fewer than 100,000 Facebook followers, meanwhile, with A.T. Kearney and Roland Berger the last of the strategy firms to accomplish this. The remainder of the ranking, consisting of L.E.K. Consulting, EY Parthenon and OC&C Strategy Consultants each saw their LinkedIn followers remain within 20,000 of their Facebook tally, meanwhile, suggesting that a number of the network probably follow across multiple platforms. 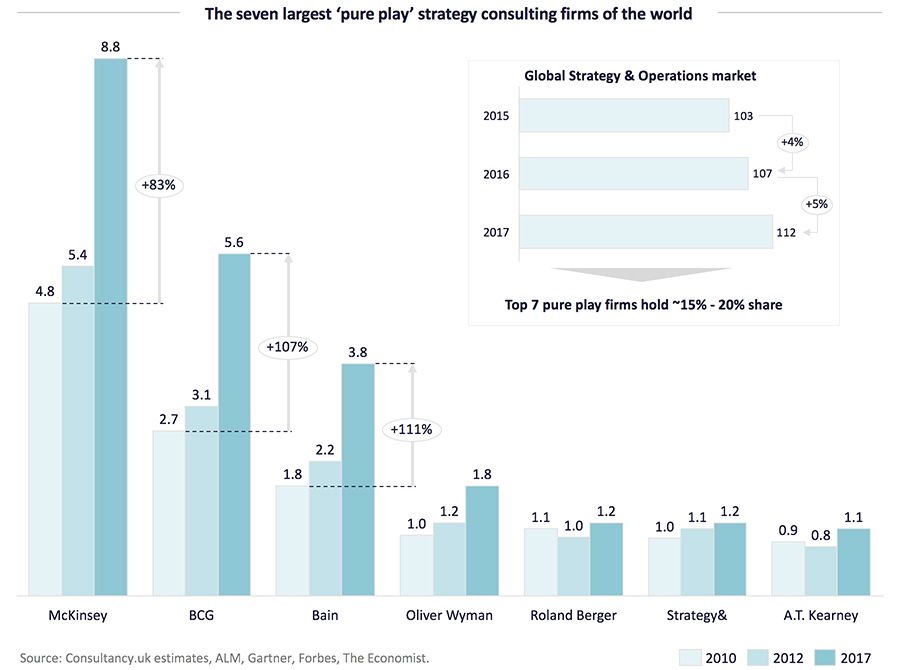 In the case of Twitter, meanwhile, BCG took the top spot, surpassing nearest rival McKinsey by 9,000 followers. With the smaller user-base of Twitter compared to Facebook, and its traditional uses not being business related, garnering a substantial network on the site is arguably the most challenging of the three platforms analysed, as seen by the firms outside of the social media top three, all of whom fail to break the 100,000 barrier. While this is again partially due to the data only accounting for a primary handle, and not the regional or functional Twitter of different aspects of a company, this would also probably have only benefitted the leaders of the pack anyway, with McKinsey tweeting from a host of accounts including McKinsey Quarterly, McKinsey Solutions and others, BCG holding outlets such as BCG Perspectives, and Strategy& (the closest of the remaining seven top firms to 100,000 followers) has Strategy+Business.

While social media is important for branding and recruitment, it is important to note that it is not the be all and end all of business. Companies who boast a strong presence in this regard still have to maintain regular quality content for their outlets, and work to convert that into sales – however the important thing, which will remain in the back of the minds of each firm on the list, is that their broad reach in the digital domain present more opportunities for them to convert.