10
The European Commission has published a discussion paper on which direction the EU should take after Brexit, writes Economic Correspondent Sean Whelan.The paper sets out five options – from reducing the EU to a simple free trade area, to pushing ahead with much more integration including a single anti terrorism agency and more defence co-operation.Presenting the white paper to the European Parliament, Commission President Jean Claude Juncker said he would not state any preference for any of the five proposals, but he said he rejects the idea “that Europe should be reduced to a free trade area” which the Commission would be the administrator of.The five scenarios are intended to kick-start a discussion in the 27 countries staying in the EU, to form the basis for an action programme for the EU institutions to be implemented after the next European Parliament elections – when the UK will have left the Union.The White Paper sets out five scenarios, each offering a glimpse into the potential state of the Union by 2025 depending on the choices Europe will make.
The scenarios cover a range of possibilities and are illustrative in nature.
They are neither mutually exclusive, nor exhaustive.

The EU27 focuses on delivering its existing reform agenda.

The unity of the EU at 27 is preserved, but may be tested by major events.

Nothing but the Single Market

The EU27 cannot agree to do more in many policy areas beyond key aspects of the single market.

Decision-making may be simpler to understand.

Those Who Want More Do More

Sometimes called the multi-speed Europe: allows some countries to move ahead with greater integration while others hold back.

The EU27 proceeds as today but allows willing member States to do more together in specific areas.

The unity of the EU at 27 is preserved while progress is made possible for those who want more.

The gap between expectation and delivery closes in countries who want and choose to do more.

Questions arise about the transparency and accountability of the different layers of decision-making.

Citizens’ rights guaranteed under EU law vary depending on where people live.

The EU27 focuses on delivering more and faster in selected policy areas not acting in where it is perceived not to have an added value.

European citizens feel that the EU is only acting where it has real added value.

A clearer focus of resources and attention on a number of selected domains helps the EU27 to act faster.

But what are the priority areas, and who decides?

Doing Much More Together

Closer integration among the 27, but would require significant treaty change.

Member States decide to do much more together across all policy areas.

There is far greater and quicker decision-making at EU level.

Parts of society which feel that the EU lacks legitimacy or has taken too much power away from national authorities risk being alienated.

European Commission President Jean-Claude Juncker said: “As we mark the 60th anniversary of the Treaties of Rome, it is time for a united Europe of 27 to shape a vision for its future. It’s time for leadership, unity and common resolve.

“The Commission’s White Paper presents a series of different paths this united EU at 27 could chose to follow. It is the start of the process, not the end, and I hope that now an honest and wide-ranging debate will take place”. 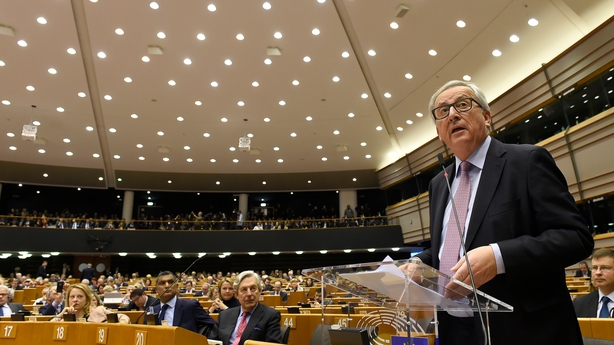 The White Paper looks at how Europe will change in the next decade, from the impact of new technologies on society and jobs, to doubts about globalisation, security concerns and the rise of populism.

It spells out the choices: being swept along by those trends, or embracing them and seizing the new opportunities they bring.

Irish EU commissioner Phil Hogan said: “Given the obvious concerns in Ireland arising from the departure of the UK from the EU, both in the short-term and the long-term, the debate on the future direction of the EU is an important one in an Irish context.

“The short-term issues will be addressed in the forthcoming Brexit negotiations while the long-term issues are inextricably related to the future of the EU, to which Ireland remains firmly committed.”

EU leaders will discuss the paper at a special summit in Rome later this month to mark 60 years of the EU’s founding document, the Treaty of Rome.

The European Commission plans to publish a series of discussion papers during the year on specific issues:

Like the White Paper, the reflection papers will offer different ideas, proposals, options or scenarios for Europe in 2025 without presenting definitive decisions at this stage.

Initial decisions are expected at the December summit, leading to a course of action being laid out before the European Parliament elections of June 2019.