In line with business leaders across the industrial gamut, private equity firms are increasingly on board with sustainability projects. According to a new study, the investment arms for major funds are implementing a number of strategies aimed at supporting sustainable economic development in line with global goals.

While the business world has finally begun to acknowledge the danger of climate change, effective action plans remain difficult to achieve. The Paris Agreement has stipulated a clear target for the decades leading up to 2100, although massively reducing emissions while not crashing the economy could be a tall order.

Businesses that are able to acquire capital can use it to boost productivity and output, thereby creating a virtuous cycle of development. However, some businesses are better able to utilise resources than others, both in terms of their relative productivity, as well as the value of the respective outcomes relative to costs (including environmental harms). Financing can therefore provide an avenue to select businesses that are aligned with various global sustainability goals, while shunning those that drive little or unsustainable social value creation.

Profit has for the longest time been the central criterion for investment decisions. Yet profit at any cost is increasingly seen as creating considerable social harms, while often delivering only marginal value. As a result, the private equity sector, which was initially sluggish to change its ways with regards to sustainability, has started to see the topic as an opportunity as much as a challenge.

A new study from PwC has explored how far sustainability goals have become part of the wider investment strategy for private equity (PE) firms. The report is based on analysis of a survey of 162 firms and includes responses from 145 general partners and 38 limited partners.

Top-line results show that responsible investment has become an issue for 91% of respondents. For 81% of respondents, ESG (environmental, social, and corporate governance) was a board matter at least once a year, while 60% said that they already have implemented measures to address human rights issues. Two-thirds have identified and prioritised Sustainable Development goals that are relevant to their investment segments.

While there is increasing concern around key issues, from human rights protections to environmental and biodiversity protection, the study finds there are mismatches between concern and action. For instance, concern among investment vehicles around climate change has increased since 2016.

In terms of risks to the PE firm itself, concern has increased from 46% of respondents in 2016 to 58% in the latest survey. However, the number who have taken action remains far below those concerned, at 9% in 2016 and 20% in 2019. Given the relatively broader scope of investment opportunities, portfolio companies face higher risks – and more concern – from PE professionals, at 83% in the latest survey. However, action is less than half of those concerned, at 31%.

In terms of the climate footprint of the portfolio companies, 77% of respondents state concern in the latest survey. 28% of respondents are taking action through the implementation of measures to mitigate their concerns. 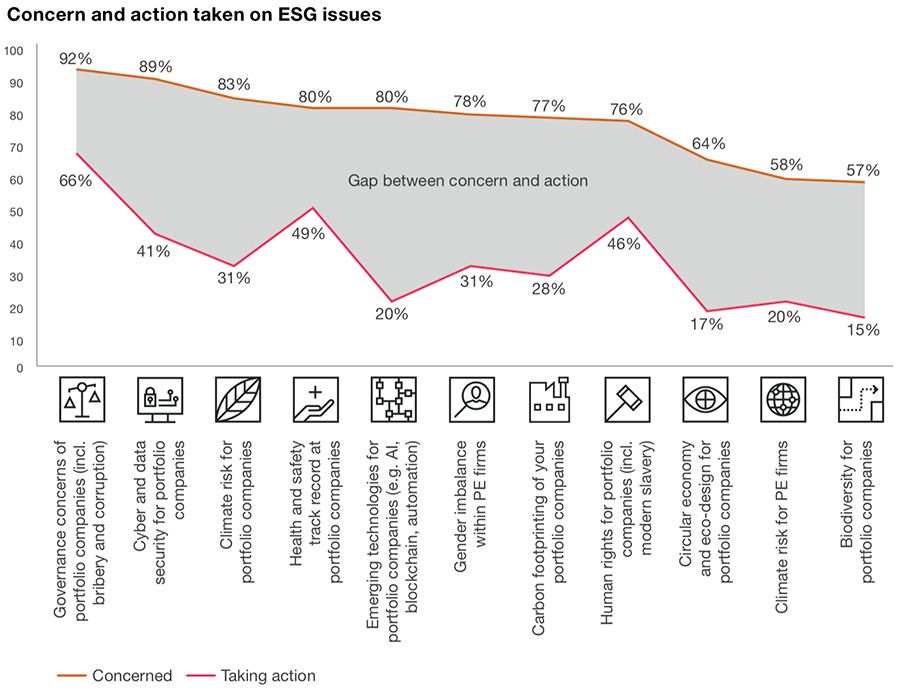 In terms of the more pressing issues for emerging responsible investment or ESG issues, governance concern of portfolio companies comes in at number one (92% of respondents), while 60% have taken action on it. Firms have focused on improving awareness – setting up policies and a range of training modules for their professionals around responsible investment decision making. Cybersecurity takes the number two spot, with 89% concerned and 41% implementing strategies to mitigate risks.

Climate risks take the number three spot in terms of concern for portfolio companies (83%), but falls behind in terms of action (31%). Health and safety track records are a key concern at 80% of businesses, with 49% implementing action. Gender imbalance within PE firms themselves ranks at 78%, which is being dealt with by 31%. A recent survey from Oliver Wyman showed that there is gender balance at 13% of GP teams in developed countries.

Biodiversity is also an increasingly pertinent topic, with risks from pollution and chemical use increasingly driving wider systematic risks around environmental outcomes. It featured at number eight on the ranking of most likely global risks for the coming decade, with its impact at number six. As it stands, biodiversity is noted as an issue at 57% of firms, with 15% implementing action.