A new report has revealed that rather than being a method of avoiding losses, predictive maintenance of equipment could create major value for businesses. As a result, more than eight in every 10 companies are exploring the topic, with the market for predictive maintenance expected to grow by as much as 40% in years to come.

Big data has been making headlines in a number of industries, promising to revolutionise the way in which businesses are able to make decisions, thereby leading to greater operational efficiency, cost reduction and reduced risk. In multiple sectors, it is also being used to predictively improve business performance, such as the aviation industry, where big data, and associated analytics are leveraged for the maintenance of aircraft, not merely to improve long term outcomes through predictive maintenance system.

Predictive maintenance (PdM) techniques are primarily designed to help determine the condition of in-service equipment, and predict when maintenance should be performed. When executed correctly, this approach can avoid costly down-time of machines compromised by neglect, instead overseeing a smooth transition of much needed new parts and repairs. As a result, the technique promises cost savings over routine or time-based preventive maintenance, because tasks are performed only when warranted.

However, beyond the immediate savings, a new study from Roland Berger has found that predictive maintenance offers companies the opportunity to fundamentally transform their service and business model. In an ever more crowded, fast changing market, the efficiency and agility allowed by PdM could provide a vital advantage over market competitors. If companies can change their mindset to accommodate for this, the potential is huge, with the worldwide market for PdM subsequently set to grow by 20-40%. 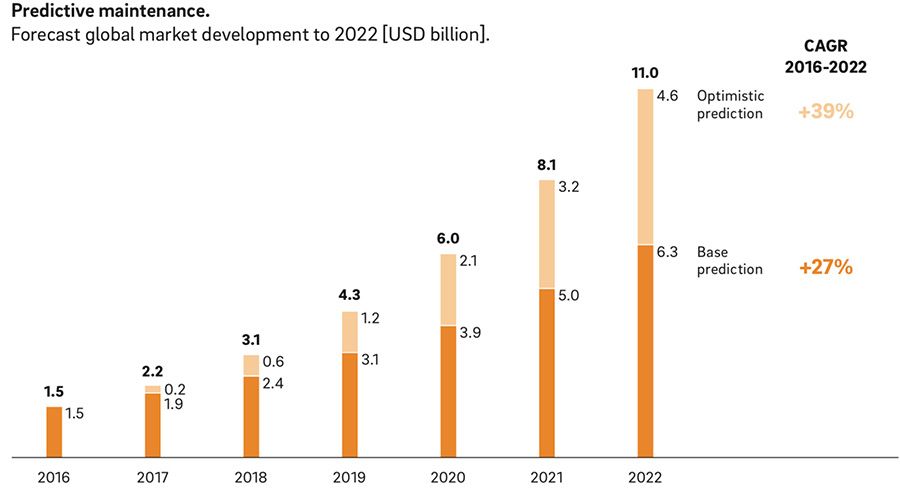 Analysts suggest that at that rate, by 2022 it will be worth $11 billion globally, compared to the $3.1 billion of today’s market. Much of the growth will be com­mencing from Europe, where some PdM solutions have already hit the market or are at an advanced stage of de­velopment.

Because of the perceived benefits of mastering PdM for the market of tomorrow, it has already established itself as an important industry trend in the global industrial and manufacturing indus­tries. A previous study, also by Roland Berger, VDMA and Deutsche Messe AG subsequently found 81% of companies are presently putting significant time and resources toward the topic, while a further 40% believed that mastering PdM will be particularly important for future business. Despite the massive appeal of PdM, and the apparent shift of mindsets across industries, however, Roland Berger has now found that that more than 50% of companies are not yet pushing their own predictive maintenance business model.

More often than not, the researchers attribute this to the fact that predictive maintenance is still misinterpreted as a technical advancement only. The problem is that the figures regarding the meteoric growth trajectory of PdM reflect the tactic is far more diverse than that. In fact, the $11 billion of 2022 will include all forms of PdM, from services to components, contracts, consulting services, IT architec­ture, and software.

Commenting on this, Sebastian Feldman, a Partner at Roland Berger and a co-author of the paper, said, “Predictive mainte-nance is not at all just a matter of technology. The real challenge lies both in process & decision support and the subsequent creation of business models.”

Roland Berger outlined six dimensions of predictive maintenance which all firms should work to exploit. In order to monitor equipment, first sensor technology, data and signal processing and condition monitoring and diagnosis facilities should be tackled before more complex tasks. Then, companies can concentrate on honing their predictive ability, as rather than just recording the current status of machinery, PdM makes it possible to forecast its future condition.

The fifth and sixth dimensions both focus on how the leveraging of PdM can subsequently change a business’ operational model. Process and decision support is terms “the holy grail of PdM”, as automatic decision-making and pro­cess steering can see a firm run like a self-driving car, meaning industry processes could to a large extent function autonomously. When it comes to automating processes and decisions, firms need be clear about whether their customers want to retain control of the model. Once they do, finally, they can consider how PdM might change their  service/business model. Companies can use the possibilities described above to de­rive a service model based on PdM. They should work to­gether with their customers to tailor this model for their spe­cific application and industry. This type of customisation, which may involve cooperating with further partners, is a necessity to create an attractive service model and also in­volves the establishment of new tariff and commercialisation models.

The major problem for firms is that many of the theoretical service and busi­ness models for PdM are not possible within traditional orga­nisational and corporate structures. If the company wants to fully exploit the commercial potential of PdM, it will likely have to completely revisit its existing setup. For example, previously centralised organisations must open themselves up to new ideas from all areas of the company, while firms will also need to do more to work closely with their customers to understand the cost-saving and yield-boosting potential of PdM. In order to do this, groups may also need to bring in external partners if they cannot build up specific competencies internally, or if it would take them too long to do so – a classic dig­ital approach.