It has long been forecast that Artificial Intelligence and automation will bring about a workforce re-alignment, the scale of which having not been seen since the industrial revolution. While dialogue usually centres on ‘unskilled’ work, however, the dramatic shift of labour may not be confined to blue-collar work, with management consultants also facing significant change to their roles in the coming years.

The continued march of innovative new Artificial Intelligence (AI) has brought with it the potential for improved efficiency of resources, heightened productivity in manufacturing, and even the potential for low-cost medical care in the developing world. However, not all the effects of the new AI revolution are thought of in positive lights. According to consulting firm McKinsey & Company, while less than 5% of jobs could be entirely replaced by technology, over 60% of all work activities could be in some manner automated by 2055 – leading to a colossal re-alignment in the labour market.

The first effects of this have already been felt in certain fields of repetitive work, as illustrated by The Office of National Statistics’ (ONS) Annual Population Survey in 2017, which estimated the UK had seen the number of manufacturing jobs nosedive by 17% over the past decade. The possible loss of 620,000 jobs was attributed by some to the advancement of cheap machinery, which enabled employers to cut costs by laying off large numbers of staff. 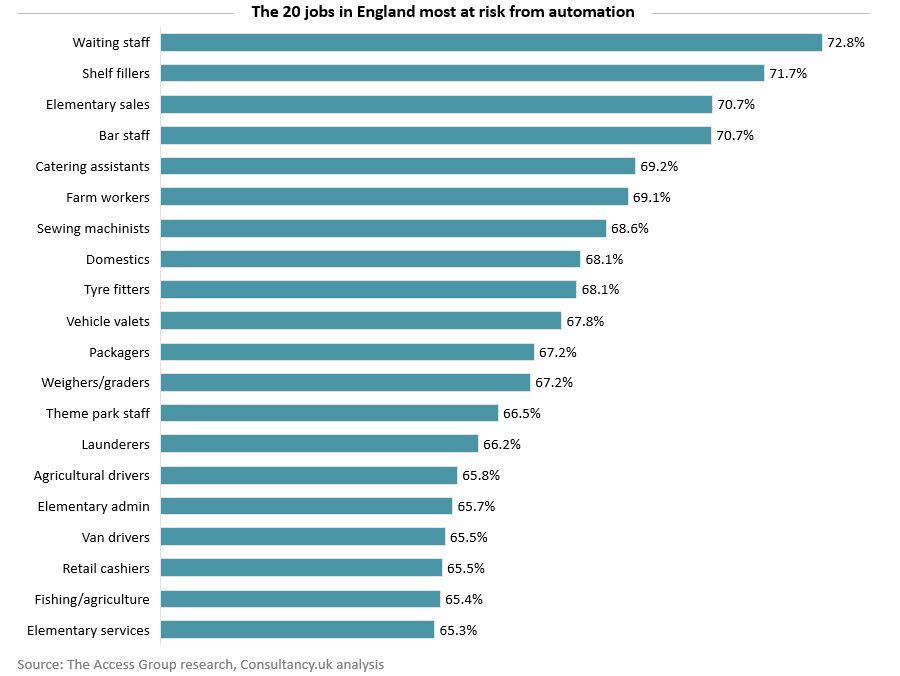 Reinforcing this, new research from ONS has revealed that around 1.5 million jobs in England could be impacted by technology, with some of their duties and tasks being automated in the future. Predictably, ‘elementary’ roles which feature higher levels of repetitive tasks are most at threat from automation.

According to the analysis, of 20 million people in England, 7.4% are at high risk of automation. The most likely to be replaced by machinery are waiting staff in the dining sector, at a probability of 72.81%. Shelf fillers, elementary sales workers, bar staff and kitchen or catering assistants follow closely behind. While all of the 20 jobs most at risk of being automated are in line with these roles, however, it would be wrong to assume that only blue-collar roles are set to be impacted.

With companies in the finance, insurance, information and communications sectors already leveraging AI to improve both efficiency and accuracy, jobs which rely on rigid systems of routine in these sectors could easily be replicated by digital technology. Indeed, according to ONS, management consultants could soon find their roles drastically changed due to automation. 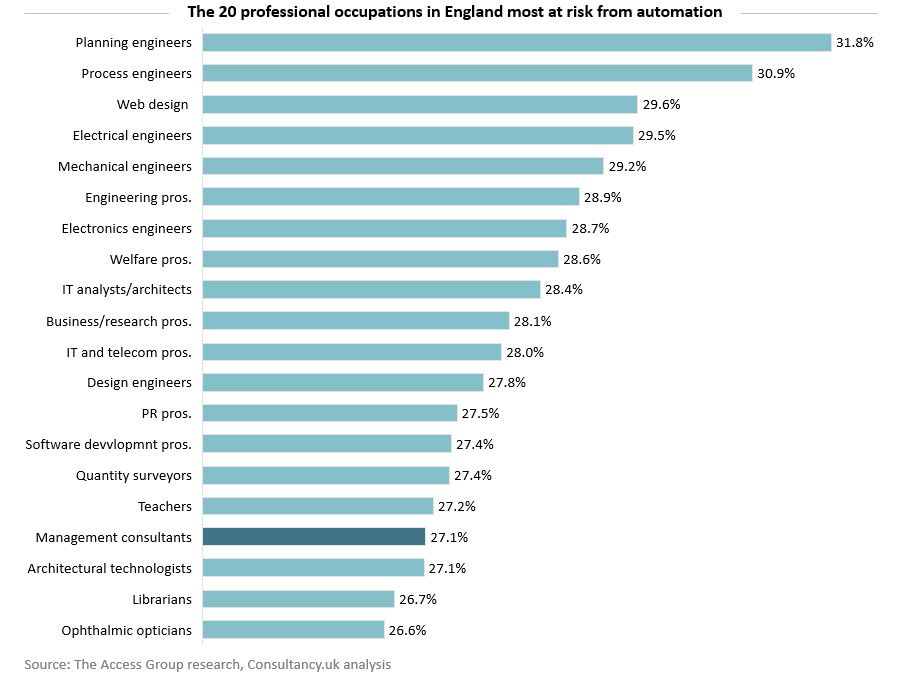 While no industry saw less than a 20% risk, consultants and business analysts were estimated as being at a medium level of risk from automation. At 27.09%, consulting was found to be more automation-friendly than the work of architectural technologies, librarians and opticians, and was among the 20 roles most at risk from disruption in the data’s ‘professional occupations’ category.

A release from the firm on the data concluded, “Automation and new technology are changing the very nature of many jobs. The good news is that… by 2037, widespread adoption of AI could generate more jobs in the UK than it displaces. But every workforce needs to be more agile, and there will be an emphasis on companies to recruit and develop workforces with high levels of learning agility. Invest in people management skills, as this won’t be replaced… Ask what skills will be useful in the future and make these integral to your business. To make sure automation makes you irreplaceable, you’ll need to plan ahead and be proactive.”

Coinciding with the release of the study, The Access Group also pulled together an interactive tool allowing people to input their jobs and see how likely it is they will need to reskill. The tool tells users what the percentage or likelihood is that their role will be replaced by future automation.