Transformative change inevitably brings serious human impacts with it for a firm’s staff. In order to cushion the blow, change management should be a cornerstone of any transformation, according to Ed Caldwell, Monica LaRue and Michael Blahnik from consulting firm RGP.

Change management is an integral ingredient for successful transformations. People affected by change must believe and the buy into the plan, benefits and organisational vision. Unless vision, strategy and IT transformations use change management to ensure they are incorporated and understood by stakeholders, they won’t work. As a result, the transformation project will suffer from delays and rising costs due to competing priorities and a lack of employee and leadership belief from the very start.

A failure to understand the importance of change management underpins the fact that major transformational initiatives worth millions of dollars carry a success rate of just 30%. Overall, research shows that more than 50% of these fail, while 20% only partly deliver on their goals. According to professional services firm RGP, this is something the company recently found one of its clients facing. 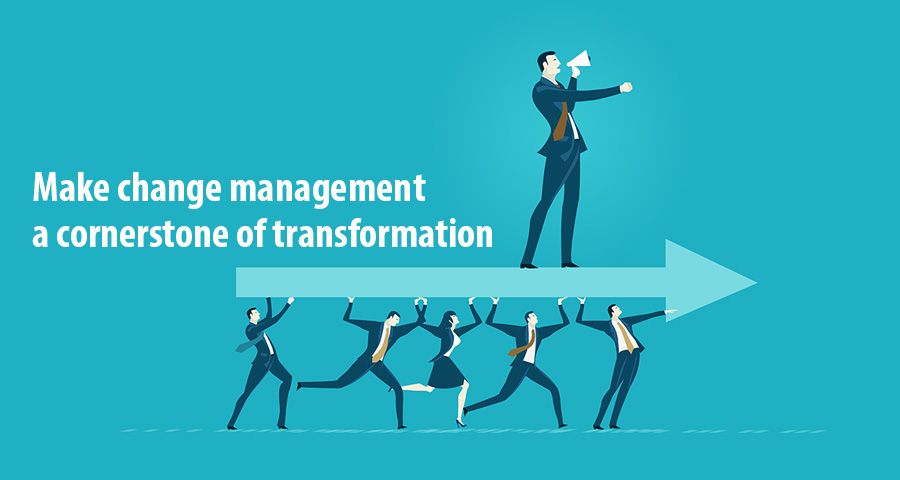 RGP Vice President, Monica LaRue recounted, “They were lamenting that 70% of their initiatives – which were good ideas for the company – were not being successfully implemented across the finish line, even with a best-in-class Project Management methodology. They discovered they were not addressing the ‘people’ side of the change they were introducing, and that was the crux of the failures.”

This is especially true in the digital space. Organisations there tend to focus on hard aspects of change, such as a new IT system or its governance. However, while these are important areas, they are easier to recover from than neglecting the culture of a firm. In fact, the majority of tech project failures can be attributed to people-related issues such as leadership and communication.

Pointing to the fact people-related issues account for seven of the top 10 reasons that projects fail, Ed Caldwell, Vice President, Change Management at RGP, said, “It’s a lesson that all organisations should take to heart as they plan for transformational initiatives, which often come with high stakes and high price tags.”

As a result, the company incorporated an effective Change Management methodology that is now mandatory in all their major initiatives going forward. The change has already seen a dramatic improvement in the successful implementation of all future initiatives.

Michael Blahnik, Director of Change Management at RGP, explained, “Even the best technology does not deliver the intended value if people don’t engage with and adapt to the new ways of working.”

First, companies should plan for change management. Stakeholders such as staff and management will not invest in a major change initiative if they believe it will fail. An effective change management strategy accounts for the human impacts as well as process and technology issues, and works to get those elements of a business to believe in the changes being made.

“Even the best technology does not deliver the intended value if people don’t engage with and adapt to the new ways of working.”

LaRue explained, “At RGP we advise our clients at the outset of any business transformation to plan for how they will manage and support the necessary organisational changes.”

Meanwhile, firms should encourage the adoption of technology via training across their operations. According to a poll from APM, skills and capability shortages were cited as a potential barrier to transformation work by a third of organisations questioned. Having access to enough people with the right project management skills and capabilities in the UK was also a concern for 39% of respondents.


Blahnik stated, “Make sure stakeholders and their teams understand how the change benefits them. For example, don’t just create one-size-fits-all training and communications. Instead, customise that information to stakeholders based on their job roles.”

Third, organisations should reframe the debate around change management in terms of it being an insurance policy. As mentioned, failing to plan change management properly can result in huge issues further down the line, so firms should consider it a method of insulating themselves from potential failure. If not addressed correctly, a transformed future state can result in organisational misalignment with significantly lower workforce productivity, so it is something firms must insure themselves from.

Finally, companies planning transformations should build sustainable foundations for further changes in the future. Rather than reinventing the wheel on each project, firms should learn from previous experiences of change, while sharing best practices from those occasions across the firm.

Ed Caldwell concluded, “Don’t just focus on the project or initiatives that are currently in the works. Look ahead and develop internal change capabilities and reusable assets that can be honed on a major initiative and then leveraged for future significant changes.”