According to data sourced from Tussell, a Consultancy.uk partner on government consulting contract data, the quarter’s £350 million contract value saw the total value of public sector consulting contracts awarded up to the end of September surpass the £1.4 billion barrier.


KPMG managed to scoop the largest contract in the period – a £29 million call-off contract (a blanket order) to help the Ministry of Defence (MoD) with the implementation of its Defence Support Operating Model (DSOM) programme, a large-scale business and SAP-driven digital transformation.

PwC won a contract of similar size, also at the MoD. The rival Big Four firm was selected for a £26 million three-year contract to create a common way of working for the 2,700 people in its finance department. As part of the MoD’s aim to enhance its finance operating model, the Functional Leadership Programme launched, and PwC has been tasked with supporting the design and build of the new operating model, as well as the delivery and change management. 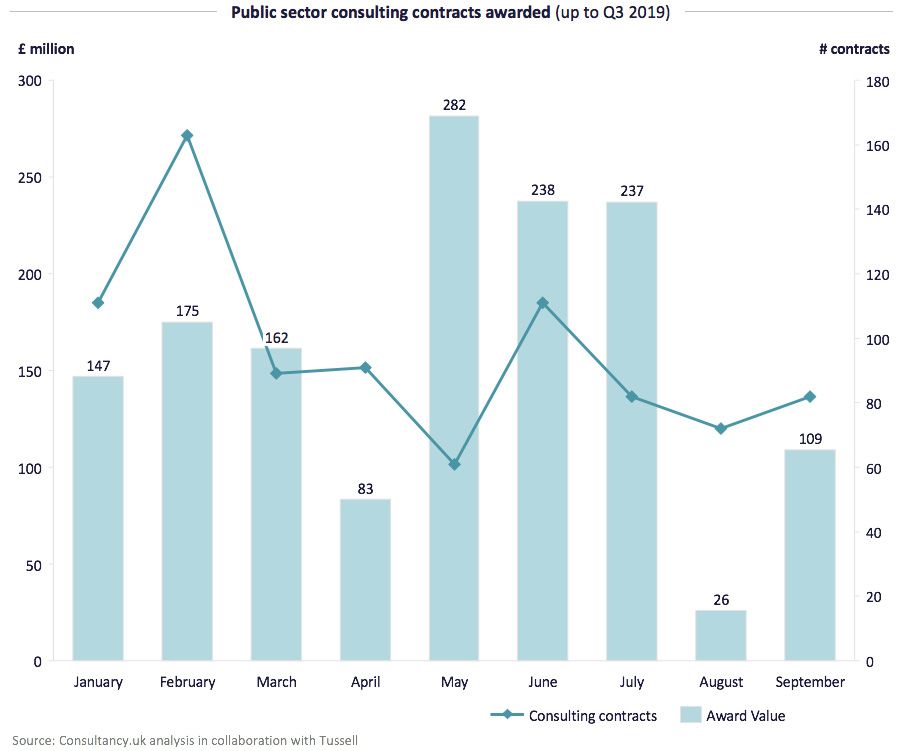 The Big Four firm also won a £8 million call-off contract to support the Foreign & Commonwealth Office (FCO) with the delivery of an inclusive economic growth programme in South Africa. The three-year contract is part of FCO’s Prosperity Fund, which frees up UK resources to help developing economies reduce poverty and achieve the UN Sustainable Development Goals.

The Foreign & Commonwealth Office was one of the largest spenders in the period investigated, also tapping ICF for £12 million and KPMG for £10 million (both contracts focus on work for the so-called China Infrastructure Programme, one of several Prosperity Fund programmes in China), Deloitte for £5 million (financial services consultancy) and EY for £5 million (support for the Brazil Green Finance Programme, aimed at boosting green growth in the country).

Deloitte won the most contracts of any consulting firm, the majority of which were handed out by Central Government institutions. Two of these were Brexit-related: a £950,000 from the Department for Business, Energy & Industrial Strategy (BEIS) for corporate finance advice on the impact of Brexit on the Single Electricity Market in Ireland, and a £1 million contract from Government Digital Service to provide staffing resources for urgent EU exit projects. 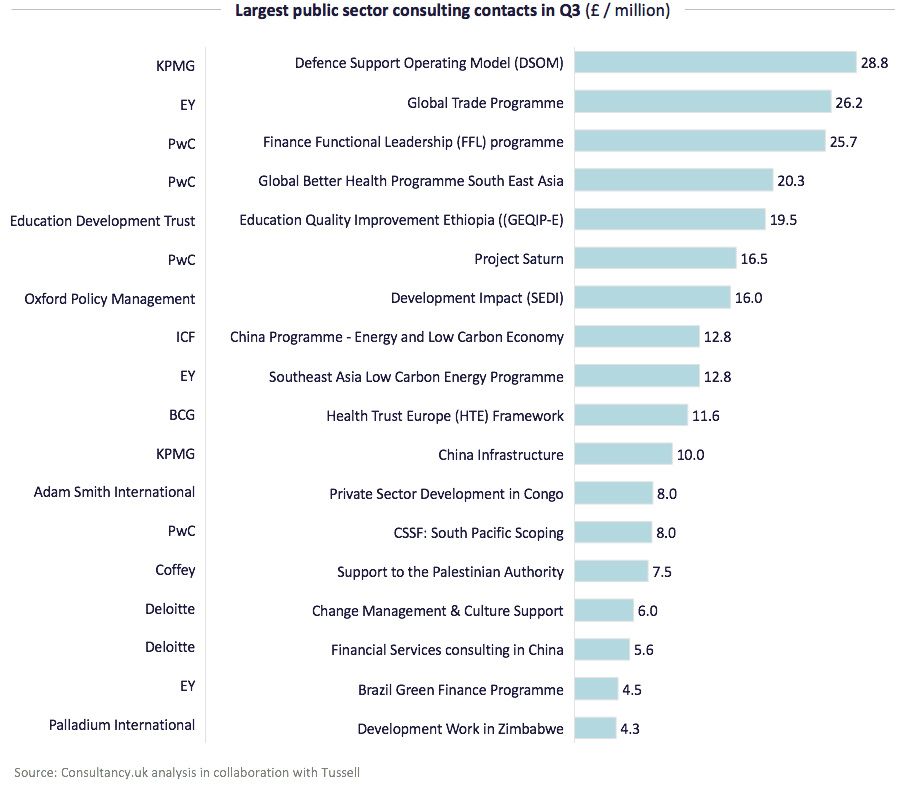 In the Local Government space, which represents less than 10% of total contracted value, KMPG for instance won a £450,000 contract from Bournemouth Borough Council to help it figure out how it should be using cutting edge technology such as artificial intelligence, robotic process automation and big data.

Beyond the Big Four, Boston Consulting Group won a £12 million contract with the Department for Environment, Food & Rural Affairs, aimed at conducting strategic work around Brexit. Economics consultancy Adam Smith International was procured for £8 million to help the Department for International Development reduce poverty in the Democratic Republic of the Congo. Palladium International, one of the UK Government’s largest private sector partners for international development work, was selected to lead an engagement in Zimbabwe.

Commenting on the analysis, Tamzen Isacsson, Chief Executive of the MCA, said: “Consulting in the public sector is up 12% since 2016 and this is largely linked to the significant effort government is putting into digital transformation programmes. According to an independent survey commissioned by the MCA, consultants are valued by public sector leaders for the transformational impact, innovation and increased efficiency they bring.”

In the third quarter, the public sector created over 20 consulting and business service frameworks.