Investors and CEOs are upbeat about the prospects of their own companies, as well as the global economy, according to a new study. However, a range of new challenges faced by modern businesses mean that while organic growth remains their key focus, cyber threats are considered a major threat by investors and CEOs alike.

CEOs have perceptions about the expectations of investors are not always correct or are exaggerations, with executives often perceiving investors as much more cautious than they actually are. In order to further chart the difference between the two groups, a PwC report titled ‘Anxious optimism in a complex world’, considers the views of investors and CEOs in a range of top-line business matters. The research is based on a survey of 663 investment professionals in 96 countries and 1,293 CEOs around the world.


The global economy has improved in recent years, with stronger growth figures in the EU, while immediate concerns around debt levels in China have softened. The US too continues a strong performance on the back of policies implemented prior to the new administration. Equities, even with the recent dip, continue to offer strong returns – particularly if stock buy-backs from the latest round of US tax cuts kick in. 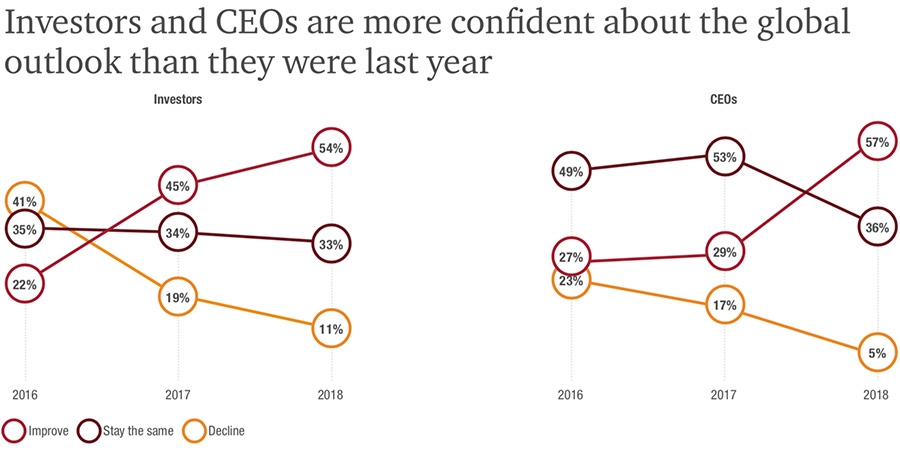 The relatively robust performances have seen both investor and CEO respondents, up their forecast for global economic growth over the coming 12 months, with 54% of investors projecting improvement, compared to 45% in last year’s report. On the CEO side, 57% project improvement, up significantly on 29% last year. Few respondents on either side project there to be a decline, at 11% for investors and 5% for CEOs for the coming 12 months.

While most respondents are upbeat about global growth, there is at least some concern around the prospects of the companies invested in by investors and run by CEOs. Investor confidence remains flat, with 23% projecting growth over the coming 12 months, while, for the coming three years, investor confidence fell from 31% last year to 20% this year. 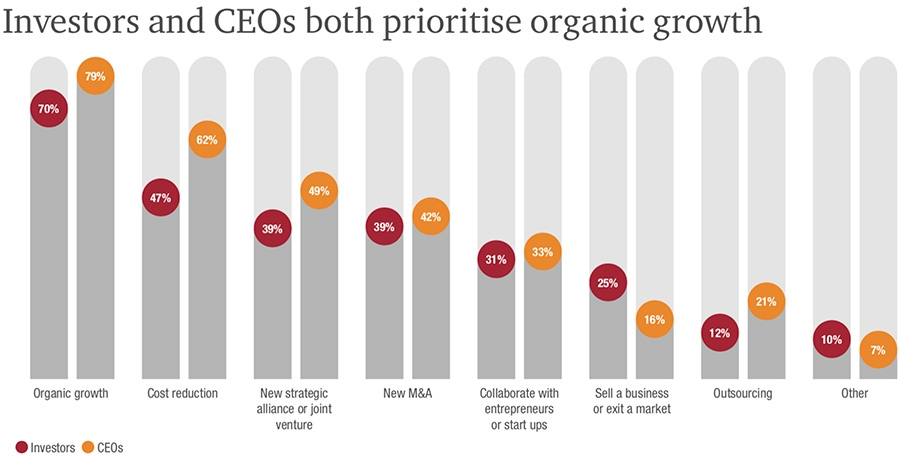 The respondents were also asked what kinds of activities organisations are planning in the coming 12 months in order to drive corporate growth or probability. In terms of how growth is to be achieved in the short- and mid-term, both respondents cited organic growth more highly than inorganic growth – at 79% of CEOs and 70% of investors. Cost reduction remains on the minds of CEOs in particular, at 62%, while almost half of the investors (47%) chimed in with a similar sentiment.

Interestingly, new strategic alliances or joint ventures figured more highly than M&A – the former cited by 49% of CEOs and 39% of investors respectively. Recent analysis shows that while corporates continue to be on the lookout for deals, heated competition with PE firms, among others, has driven up multiples and risks for M&A, with planning for such activity at 42% from CEOs and 39% from investors. Outsourcing appears to have fallen out of favour, cited by 21% of CEOs and 12% of investors. 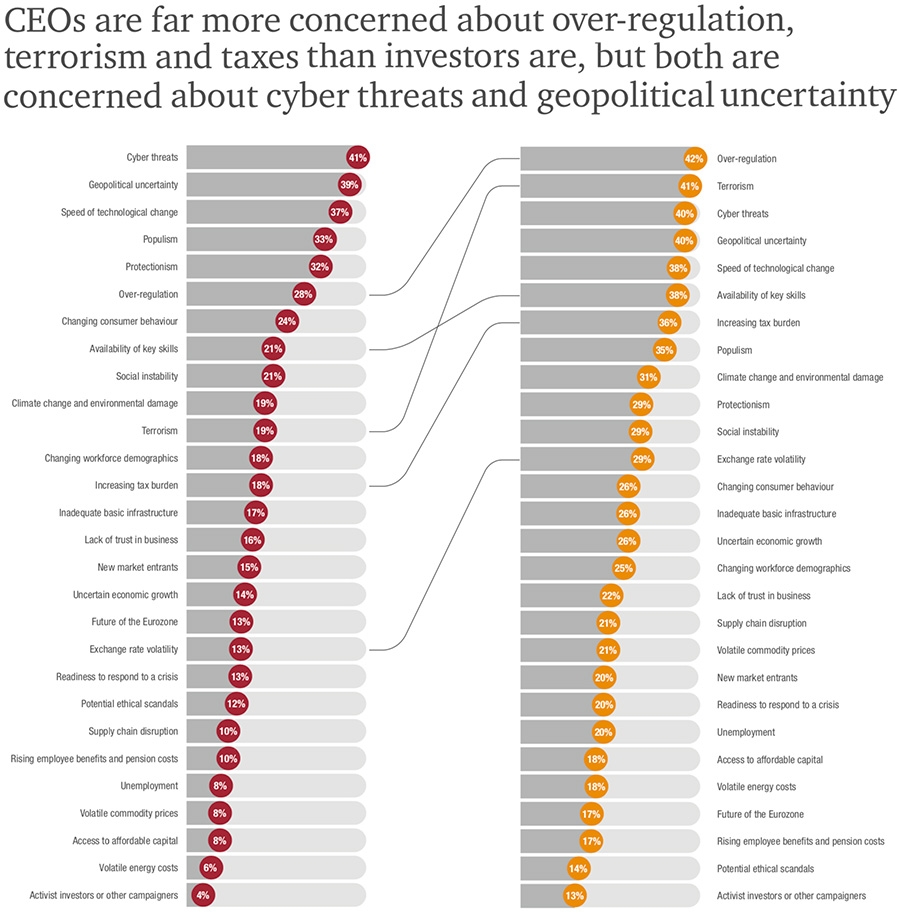 Respondents were also ask more broadly about potential business, economic, policy, social and environmental threats to company growth prospects. Some major differences were noted between investors on the one side and CEOs on the other.

Investors put cyber threats on the poll position, at 41% of respondents, followed by geopolitical uncertainty. CEOs meanwhile were most concerned about regulation (42%) followed by terrorism – cyber threats came in third spot. Investors, meanwhile, remain concerned about the speed of technological change – raising the spectre of disruption on their investment – while populism and protectionism take fourth and fifth spots respectively. CEOs cited geopolitical uncertainty and the speed of technological change in fourth and fifth spots respectively.