Agile adaptation to significant changes in business environments can give companies an edge, or even spell their survival in sometimes disrupted environments. Despite the importance of agility, however, nearly half of all firms are only in the experimental phase of agile work.

In the face of disruption from new technologies, businesses can quickly find their offerings outmoded. Being at the forefront of market developments across various industries, is an increasingly important step for businesses. Survival is at stake in many instances, with the longevity of businesses increasingly in the spotlight. Of the fortune 500 companies in 1955, 12% survived into 2016, while around half of companies on the index have dropped off since 2000.

The survey found that agility was a strategic priority for 61% of respondents. 71% said that agility translated into better customer service experience, while 52% said agility allowed for faster time to market for products and services and 42% said it improved innovation. However, in terms of broader agility leadership, few respondents were said to be in the ‘driving seat’, with CEOs being the most likely to own ‘adaptability’, followed by COO at 25% and Customer Experience (CX) at 23%. Around a quarter (23%) of respondents said that no one held responsibility for organisational agility.

Agility remains a relatively new feature of the wider organisational development. Most organisations (57%) have been agile for three years or less, while around a third say that they have been agile for 3-5 years. On the ‘maturity curve’, around 48% are in the ad hoc experimentation with agile phase, where there are pockets of agility. Around a third meanwhile, have documented consistent practices and technologies, although operations are still maturing, while 15% have quantitatively managed measurable results in agile. 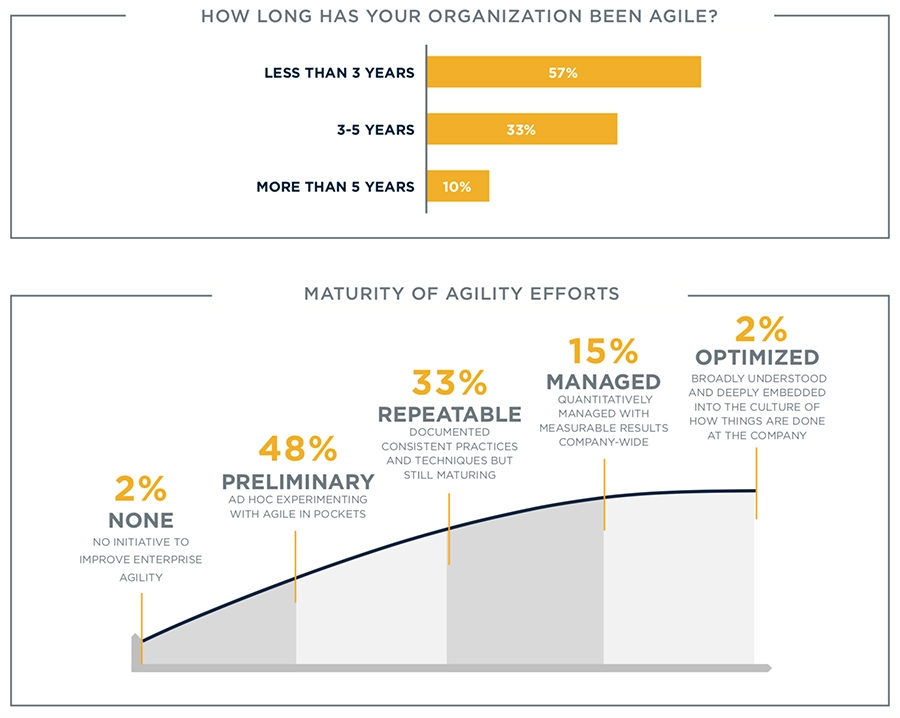 When it comes to the challenges faced by companies seeking to become agile, culture was the top most cited – at 54% of respondents. Legacy computer systems took the second spot (43%), cited for their inflexibility. While a lack of leadership alignment (41%), organisational design (38%) and decision making process for funding initiatives rounded off the top five challenges. A lack of management support and lack of executive support were less of a concern, at 20% and 21% of respondents respectively. 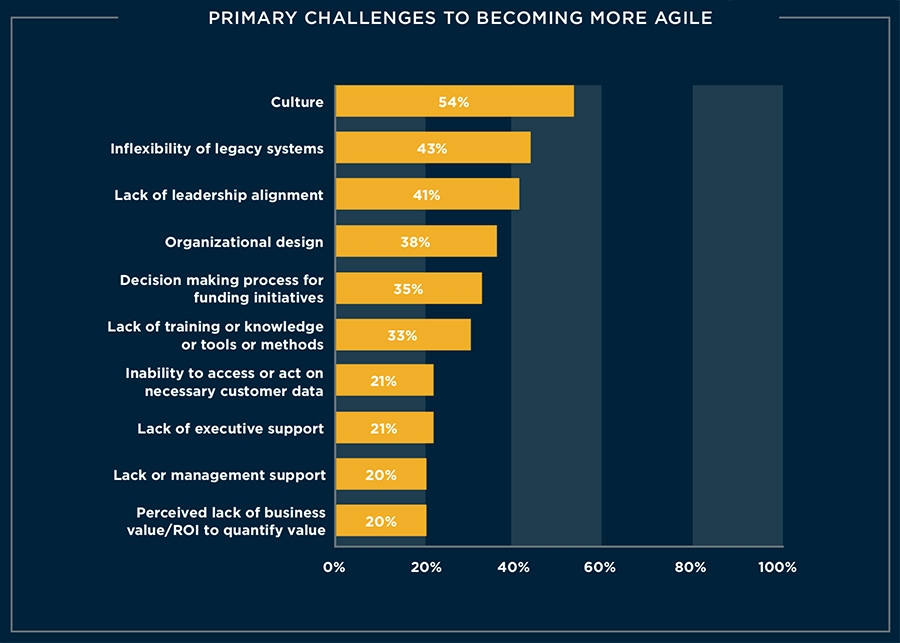 Paul Hagen, senior principal and West Monroe’s leader for customer experience and innovation strategy, commented, “Customer behaviour is changing as fast as digital capabilities evolve, and firms that respond too slowly or are too vested in existing business models find themselves eclipsed by newcomers or big technology outsiders. On the other hand, companies that quickly evolve their capabilities to drive new value to customers can create an ‘adaptive advantage.’ To do so, they need deep understanding of the issues customers are trying to solve or, better yet, the ability to foresee future issues and help customers in areas they don’t even know they need help.”