Created in the midst of a global pandemic during the summer of 2020, Covid-19 Student Response Network (CSRN) is now the UK’s largest student-led response to the global pandemic.

Launched by the Bristol branch of 180 Degrees Consulting, CSRN was designed to unite established student consultancies from across the UK with the aim of aiding charities and NGO’s that have been so awfully impacted by Covid-19.

After recognising the severity of the crisis in Beirut after the recent explosion, CSRN joined forces with 180 Degrees Consulting branches from all over the world to launch a global response. 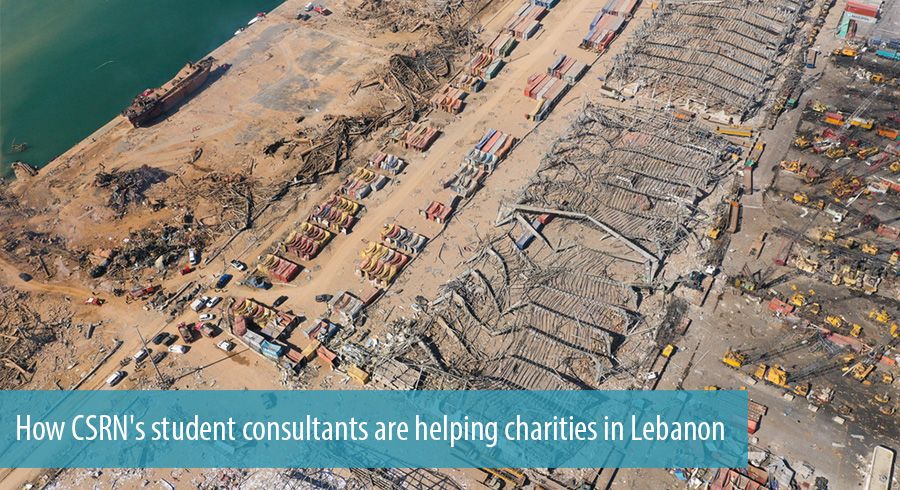 A focus on Lebanon

“After seeing the devastating effects of the Beirut explosion in August, we felt we had a duty to aid the situation. Our fundamental aim is to help people and we decided that we’d be able to have the greatest impact by focusing on the people of Lebanon. It’s been an enormous challenge, but it has come with equally large lessons and life changing opportunities”, explained Lee D’Arcy, Chief Operating Officer of CSRN.

The network of eleven 180 Degrees branches from 6 different countries worked together offering their consultancy services to organisations impacted by the Beirut explosion – an effort which amounted to immense success across the board. Alongside a global network of students, CSRN built a team of incredibly passionate Lebanese students who engaged with charities and community groups in Beirut on behalf of the network, which meant that the team were able to cooperate and adapt, despite being overseas.

CSRN’s Client Services team secured the initial 28 projects within 8 days of starting client acquisition, a testament to their rapid response. Much like how CSRN started as a response to Covid and grew to become much more, their response in Lebanon and Beirut stretched much further than just the immediate impacts of the explosion.

D’Arcy outlines the extent of CSRN’s range and said, “One day we’re helping a cancer charity develop their online presence, the next we’re helping an organisation plan the opening of a new factory to produce female hygiene products at an affordable price. The work has covered such range now that we’ve been privileged to learn so much about both the challenges Lebanon is facing as well as the amazing aspects of the country and the amazing people too.”

The extent of CSRN’s success is all the more impressive when factors such as time zone and cultural differences are considered. Line Tab, the co-founder of Lebanese charity Dawrati notes this impressive feat, and said: “At Dawrati, we consider ourselves so lucky to have worked with CSRN! From innovative ideas to extremely professional conduct, the team was very reactive, engaged and succeeded in taking the interests of both our beneficiaries and our initiative.”

“For a team that does not even live in our country, they succeeded in grasping our culture, challenges and expectations.”

Of course, many organisations exist claiming to aid those in need yet, finding one that surpasses expectations and continues to help after the initial response is extremely rare. According to two local organisations on the ground in Lebanon, CSRN stood out for its longer-term perspective on support.

“What stood out for us was their nice, caring attitude and follow-up with us, even after they had finished the project”, reported SAID (Spread Awareness Increase Detection), an NGO who worked with CSRN. Another charity, the Zeinab-Lebanese Breast Cancer Foundation noted that their “effective and consistent communication” and “overall proactivity in always conducting meetings, keeping everyone up to date and constantly exchanging information.”

CSRN Chief Operating Officer “D’Arcy said: “By continuing to build their relationships, projects and lasting impacts in these regions the group endeavour to aid in the aftermath, not just the emergence, of such crises.”

Meanwhile, building on the example set in Lebanon, CSRN is currently expanding its consultancy services to Africa, launching projects in Uganda, Nigeria, Rwanda and Zambia.