Much has been written about the impact of coronavirus on leading consulting firms and the industry as a whole. Now, a new international survey has shed light on how the pandemic is impacting the top-segment of the independent landscape.

Coronavirus has had a profound impact on independent consulting, leaving many with less income and delayed project work, according to survey by Comatch among almost 1000 respondents in 20+ countries. Most respondents came from larger markets, such as Germany, France, the United Kingdom, and US.

Furthermore, many believe that their income will continue to decline for the foreseeable future, with 73% saying that their earnings will be negatively impacted over the next 3-4 months. This is similar to the situation faced by consulting firms. According to one estimate from Source Global Research, for example, the consulting industry stands to take a sizeable hit from the Covid-19 crisis, and will be worth around 18% lower at end of 2020 as a result.

Comatch’s survey found that independent consultants in travel and leisure can expect the biggest decrease in business, with earnings likely to fall by more than half. This is not particularly surprising, as the second quarter of 2020 saw the vast majority of airline fleets grounded, and many aviation businesses subsequently appealing for government support or facing administration.

More worryingly, however, the next biggest decrease in earnings will come from the construction sector. A lull in building activity is often a sign of a sustained economic downturn being on the cards, so the fact that money coming from the construction sector is expected to fall by 46% indicates that a large number of clients are scaling back or postponing projects in order to weather a likely recession. 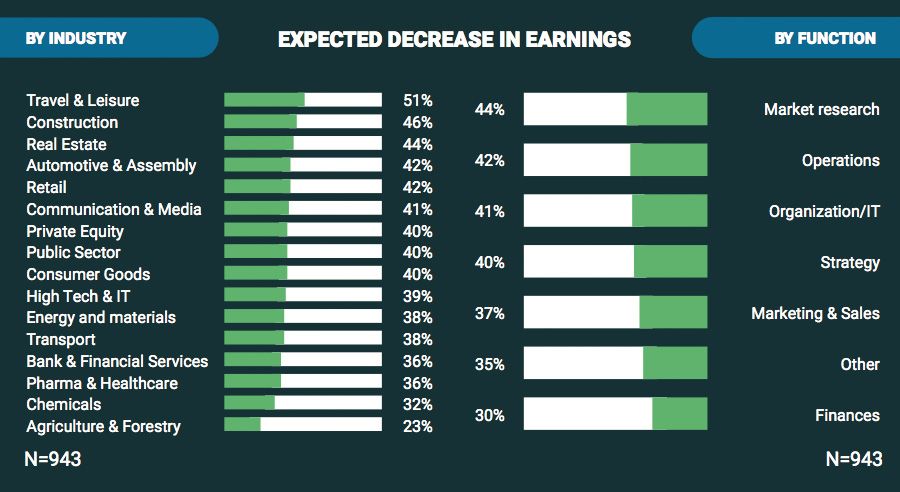 The three sectors of independent consulting which look least exposed to a drop in earnings are pharma and healthcare, chemicals and agriculture. This is perhaps unsurprising, as while the search for a cure, vaccine or more effective treatment of Covid-19 continue, pharma clients are likely to be largely insulated from the downturn – while chemicals will similarly be sheltered. Agriculture will also play an important role – and many clients in the sector will need to adapt their supply chains amid a further lockdown, meaning they turn to independent consultants for help.

In terms of function, market research is the area independents can expect a large decrease in earnings. Finances will be impacted the least – something which again might not come as such a surprise, as while market research might be seen by clients as more of a luxury, many will be seeking help with balancing the books of their organisation amid the current economic turbulence.

How independent consultants are adapting

Like other businesses, independent consultants have to adapt rapidly to the ‘new normal.’ Around 77% of survey respondents told Comatch that they will make changes to adapt to the new environment, and 43% of those said they would update their professional offer to attract new clients. On top of this, 33% said they will pursue projects outside of their usual field of expertise. Interestingly, however, in just under half of all cases, independents see a silver lining around the cloud of losing work. Pointing toward the often hectic lifestyle that comes with being your own boss, 45% confirmed they will “enjoy” their newfound free time while they can. 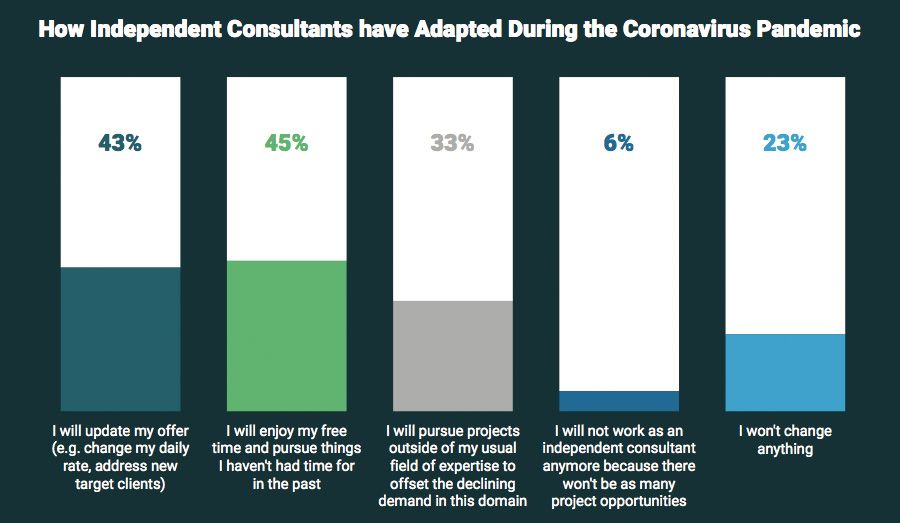 Despite this upbeat attitude to quieter times, financially, most independents feel they need more support from the state in weathering the storm. As most would fall outside of the UK Government’s Covid-19 support schemes, Comatch found that less than 20% believe enough is being done to help them. Even among those receiving support, this was found to be the case, with 30% stating the current measures were not enough.