For decades globalisation has seen production hubs shift from local to international partners, as companies seek to exploit cheaper labour with fewer legal protections. While proponents of the shift claim it supported global economic development, outsourcing work across borders and even continents has resulted in various negative impacts, particularly in terms of socio-political and environmental outcomes.

As a result, organisations across the political spectrum have railed against the concept of globalisation. Examples of this range from the cycle of anti-capitalist demonstrations, which will undoubtedly continue at the G20 summit to Buenos Aires later in 2018, to the hostile protectionism which became the driving force for the shock electoral successes of the Brexit campaign and Donald Trump in 2016. While these movements have little in the way of common ground, one thing is clear; businesses will have to adapt their practices to accommodate the changing expectations of society.

In recent years there has subsequently been a new focus on shifting to local, over global, production. These shifts are driven by the growing association of negative externalities with global trade. New analysis from A.T. Kearney explores shifts in the production landscape, and how companies are reacting to changes.

75% of respondents to the survey said that while they were largely still invested in cross-border production activity, strategies involving some form of localism had either been explored or implemented. The portion of businesses which have put localisation to work as a formal strategy currently sits at 15%, while 20% are presently implementing them. Only around one in 10 respondents said they have no plans to consider localisation.

Localised firms have begun to outperform their global peers in domestic settings, suggesting that a new focus on localisation can improve the relative integration of firms within local business environments. There are a host of benefits to localisation, from improved understanding of demand for products, by tailoring them to local expectations, to wider community engagement on the back of local talent and supply chain integration.

There are five key drivers to localisation, including rising political risks, shifting consumer preferences, strengthening industrial policies, sweeping technological change, and increasing community engagement and expectations. As a result of changes in attitude, various measures have come into force, favouring local, rather than global, procurement and engagement. Such measures have increased markedly over the past decades, from almost none in 2009 to more than 14,000 forecast for 2018. 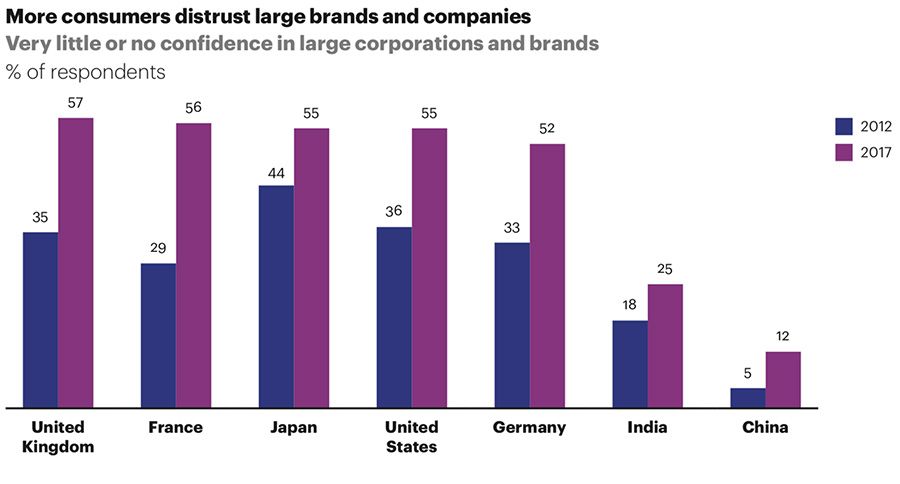 Consumers are increasingly losing trust in international brands, instead opting for local production and smaller boutique local brands. There was a sharp rise in the number of respondents that said in 2017 that they have very little or no confidence in large corporations and brands compared to 2012, up from 35% to 57% in the UK; 29% to 56% in France; from 44% to 55% in Japan; and from 36% to 55% in the US.

Consumer goods companies in particular have sought to placate consumers with more choice, particularly through the acquisition of the boutique brands, which tend to also market their products as examples of local and sustainable consumption. The shift is not merely in Western countries, where localisation for more sustainable products has been a small but growing trend for some time, but also in India where local procurement, and local products are increasingly in demand – reflecting a shift to localisation.

This is not true in all instances, with baby products and some beauty products from trusted international markets – such as New Zealand infant milk products in China – outperforming local producers, however it is important to note the context of these examples. In the case of China’s milk formula market, a breakdown in trust between local producers and consumers has long been festering, following a 2008 scandal, where toxic ingredients in Chinese produced formula killed six infants and sickened more than 300,000 across the country. Clearly, trust is a key issue faced by companies seeking to meet localisation expectations, but simply localising cannot be mistaken for a silver bullet, as failing to maintain standards will still hamper business performance.

Manufacturing is also seeing considerable shifts, with the rise of the fourth industrial revolution and a need to shift to sustainable development. These impacts too give rise to localism, with advanced manufacturing availability quickly spreading across the globe, while various regions have sought to develop “made in x” initiatives that see capacity deployed in part to meet local market demand. Specialisation in an era of highly module and easily deployable capacity is less of a priority, while such economies are more focused on creating holistic internal ecosystems to meet national requirements.

Sustainability is also increasingly seen as a necessity of manufacturing processes, with long supply chains often resulting in high secondary environmental costs, which can be mitigated by better targeted local production. This coupled with a shift in consumer sentiment for local production, as well as wider investor challenges – faced as they grapple with their “licence to operate” – mean that the supply side is seeking to create products and services that create long-term value and do not result in marginal value benefits with long-term negative outcomes.

The firm concluded, “This new attention to long-term societal issues may presage a broader shift in measuring corporate success, from short-term maximisation of shareholder value to long-term maximisation of stakeholder value. This change would mean that companies make decisions to benefit not only their shareholders, but also their employees, customers, suppliers, and the community writ large—and simultaneously maximise shareholder value in the long term as a result. These forces are causing more companies to consider the broader impact of their businesses in the communities in which they operate—and over a longer time horizon than they had considered in the past. In so doing, they are adding momentum to localisation trends.”