Coeus Consulting has won an award for its work in the utilities sector. The firm helped Electricity North West reshape its IT sourcing model, enabling the utilities company to deliver next-generation services.


The London-based consultancy was handed the ‘Best Practice In Strategic Sourcing Awards’ by the Global Sourcing Association (GSA) – a representative body for the outsourcing industry – for its work helping Electricity North West reshape how it works with external IT providers.

Electricity North West increasingly needed a range of digital skills across its business functions. However, its existing, traditional contract models were not up to the task. Deploying an innovative sourcing strategy, tailored to the particular demands of digital projects, Coeus Consulting helped its client draw up a contract with three different suppliers – bringing agility and flexibility to the fore of its sourcing strategy.

Instead of mandating a single digital supplier, Electricity North West now draws on different partners for different situations, ensuring the best possible mix of skills and costs for its request. Through the introduction of several clauses detailing the importance of collaboration and sharing of information and knowledge, the contract is explicitly designed to drive collaboration between its trio of external partners. 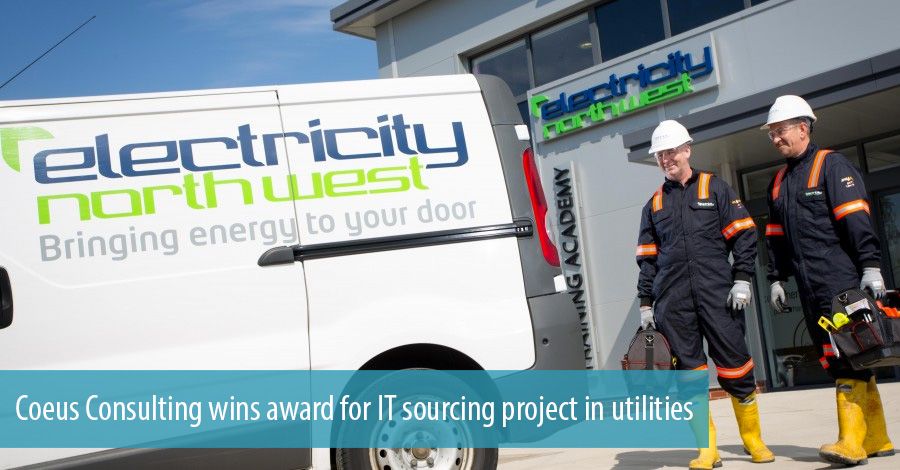 A return on investment

The new way of working has since launching delivered substantial cost benefits, with a 33% reduction of supplier rates for key digital skills amounting to savings of €20 million based on projected work. It has meanwhile also accelerated sourcing – supplier response times for new work have been cut from one month to 10 days, and standardisation further down the value chain is saving time and administration.

John Gorrell, Head of Sourcing at Coeus Consulting, remarked, “The work we delivered for Electricity North West demonstrates the enormous pressure being put on organisations and their IT departments to deliver next-generation services to customers. It is a great example of how an innovative approach to sourcing can play an integral part in this.”

According to the GSA’s awards judges, by doing so, Coeus demonstrated leading performance across five key areas, including demonstration of tangible ROI and delivery of the overall business objective of the sourcing. All of this ultimately enabled the utilities company to deliver next-generation service and ensure the right capabilities were grown or acquired to deliver the future services.