The UK Government has once again come under fire for its spending on private consulting contractors, after it emerged the industry had received contracts worth £56 million to help with the national response to the coronavirus. Deloitte, Cambridge Consultants and PwC took the three largest fees, pocketing some £23 million between them.

Despite a recent edition of the respected Global Health Security Index predicting at the turn of the year that the UK was one of the best-positioned nations in the world to handle a pandemic, Government mismanagement of the situation quickly saw Britain spiral into crisis, amid the 2020 Covid-19 outbreak. After a decade of austerity, the National Health Service had been left under-resourced and under-staffed, and hospitals quickly reached bursting point.

This saw the Government forced to call on aged practitioners to come out of retirement, and pushing student nurses to the front-line to cope with the capacity issues – as well as having to create a number of military-style field hospitals to provide extra beds. It also issued emergency calls for ventilators and personal protective equipment – both resources which the Government was found to have spurned at early points in the emerging crisis. 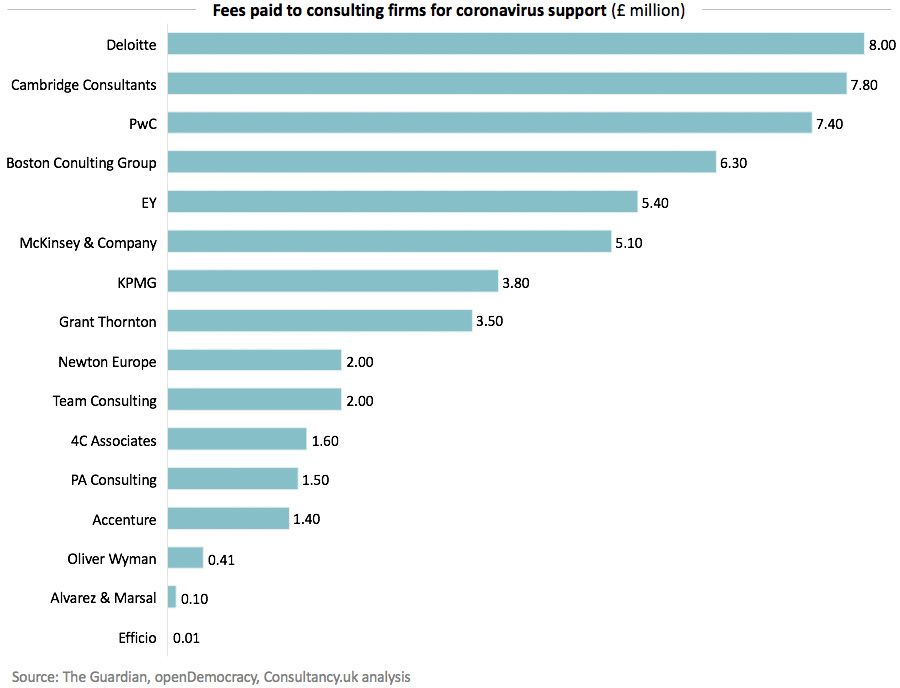 With the state scrambling to regain control of a worsening crisis, which has since seen the UK record Europe’s highest death-rate from the virus, consultants were also called upon to help paper over the cracks in Britain’s crumbling health infrastructure. Now, a joint report from newspaper The Guardian and online journalism platform openDemocracy has revealed the extent to which the Government relied on contractors during the crisis, with the news that Whitehall handed out contracts worth a total of £56 million to help with the national response to Covid-19.

All in all, 16 firms, including major companies Deloitte, PwC, Boston Consulting Group and McKinsey & Company were enlisted to bolster the Government’s response to the virus – a revelation which has drawn widespread scrutiny regarding the Civil Service’s lack of transparency on the matter. While the firms listed by The Guardian and openDemocracy are part of the Government’s procurement framework, Whitehall departments did not publish a full inventory of contracts that had been awarded to firms during the pandemic, something official guidelines state they should still make public within 30 days.

Following the leak which led to the report, Chair of the Public Accounts Committee Meg Hillier, described the lack of public declarations “sloppy,” before stating she would write and ask the Government for more details of the contracts. At the same time, she questioned why Whitehall was outsourcing to consultancy firms what she considered “bread and butter work” that the Government could be doing in-house. Beyond the concerns of proper transparency, this underlines a key debate which has been rumbling on regarding the Government’s consulting spending over the last decade.

Speaking to The Guardian, Tom Sasse, a researcher at the Institute for Government, explained, “As numbers in the civil service have been significantly cut back in recent years, we have seen. But it is not always clear that these consultants are being used well or where they can add value.”

This debate is exemplified by the fact the leak reveals Deloitte has been given contracts worth at least £8 million from four Whitehall departments. One such engagement saw it hired to help set up a network of drive-through rapid testing centres, which the Government hoped would form the spine of its plan to control the spread of coronavirus. However, as the Government struggled to meet its daily goal of testing 100,000 people per day for coronavirus, Deloitte was roundly criticised by local hospitals, which felt the audit and advisory giant was out of its depth.

Reports in the UK press in May claimed that emails from the Chief Executive of Epsom hospital had said, “Deloitte who have been commissioned by the Department of Health directly for this are not running this as well as we would like”, before going on to state the hospital was asking “to take over the running of the Chessington centre because we really need it to work much better than it is.” It was also reported that the request resulted from “severe failings in the service” at one site in Surrey, which led to the test results of NHS staff being “lost or sent to the wrong person.”

Fellow Big Four firm PwC was meanwhile contracted for £7.8 million, with up to £3 million of that coming from the Cabinet Office to provide financial advice until the end of the year, and up to £2.5 million coming from the Treasury for advice over six months. Elsewhere, PwC – which also responded to an NHS request for pro bono support with an offer a 20% fee reduction, up to the value of £20 million – has a six-month contract worth up to £1.4 million to help run an emergency coronavirus fund for small charities struggling to survive the impact of Covid-19, something charity leaders have questioned the need for.

McKinsey was meanwhile handed a contract where its consultants were paid £563,000 for six weeks of work at £14,000 a day to help create a permanent replacement for Public Health England. McKinsey reportedly was tasked to help define the new body’s “vision, purpose and narrative,” in the wake of Public Health England’s controversial axing – something many would question the value of considering the vagueness of those terms, and the apparent obviousness of what an organisation tasked with curbing the spread of a virus should be setting for goals.

While critics might point to these examples as showing the problems with contracting public work to private enterprises, the leak also showed the amounts paid to Newton Europe, PA Consulting, and Cambridge Consultants, who played important roles in the Government’s emergency call on British companies to produce large numbers of ventilators. Newton for example received £2 million in fees for work which included working alongside data management expert Quick Release to play a pivotal role in rapidly increasing production of the ESO2 device – producing 11,000 emergency ventilators in just 12 weeks.

Defending the Government’s policy on contracting consultants, a Cabinet Office spokesperson said, “As part of an unprecedented response to this global pandemic we have drawn on the expertise of a number of private sector partners. This is completely in line with procurement regulations for exceptional circumstances, where being able to procure at speed has been critical in the national response to Covid-19… We have been clear from the outset that public authorities must achieve value for taxpayers’ money and use good commercial judgment when awarding contracts.”

Tamzen Isacsson, CEO of the consulting industry’s representative body, the Management Consultancies Association, added, “Since the outbreak of Covid-19, government departments have faced an unprecedented volume of workload and using external resources has enabled the government to work quickly and with intensity on major initiatives across the UK… At short notice we’ve been able to bring world-class technical expertise and multi-disciplinary capabilities and it has been our priority to strengthen the UK government’s response, processes, and provide value for money to government departments.”